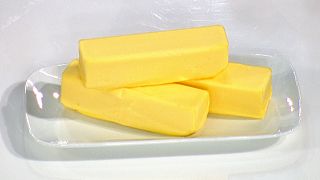 Butter storage. Who knew it was such a slippery subject?

The topic continues to pop up on social media, with many people often debating over whether butter has to be refrigerated or if you can leave butter out.

It's no wonder: If you have a stick of butter in your kitchen — and most of us do — you've obviously made a choice about where to store it. Sure, leaving it on the counter is convenient for buttering bread without tearing it to shards ... but is it safe? We turned to food experts for the verdict.

Does butter need to be refrigerated?

Food safety experts told TODAY Food that yes, you can leave butter out on the counter — as long as you follow a few guidelines (see below). Of course, they had some caveats, too.

First: Storing butter in the fridge is obviously going to be the most foolproof way of keeping the food safe and free of potential contaminants.

"Let's equate it to going out in a thunderstorm. If you take a walk a around the block, are you going to get struck? Probably not. But to make absolutely sure, stay in doors until storm passes. It's the same thing with food safety," Joe Kivett, co-author of "The Food Safety Book: What You Don't Know Can Kill You," told TODAY.

Butter's super-high fatty acid content is what makes it less susceptible to bacteria, as opposed to foods with high-water content, Kivett explained.

He and co-author Mark Tamplin, as well as another set of food-safety experts — Don Schaffner, food microbiology professor at Rutgers University and Ben Chapman, professor at North Carolina State University, who are co-hosts of the "Food Safety Talk" podcast — all assured us that leaving butter on the counter (as many Europeans do) is safe, as long as you follow the rules below.

How do you store butter on the counter safely and how long can butter sit out?

1. Use pasteurized butter. Unless it says "raw," most butter is pasteurized, meaning it's free of pathogens (bacteria that can cause foodborne illness).

2. Make sure it's salted. Salt keeps that evil bacteria at bay.

4. Keep it out for a week or two, max. Depending on the temperature of your kitchen, butter may develop a rancid taste after a week or two; the cooler your kitchen, the longer it will last, Kivett and Tamplin added. One way to keep waste away? Remove from the fridge only the amount of butter you will use in one week.

5. Don't cross-contaminate. Because it's pasteurized, butter can only be contaminated by outside sources like someone's hands (while opening the package) or a dirty utensil, Kivett and Tamplin noted. They recommend cutting/scooping the portion of butter you plan to use, and placing it on a small plate to minimize the risk of contaminating the butter in the storage dish.

Food poisoning outbreaks due to butter are exceedingly rare nowadays (due to all that pasteurization). There is one example of a case in Finland in the 1990s linked to Listeria monocytogenes in butter, but this was based on butter made from contaminated raw materials, and the people who were affected were already sick and in the hospital, Schaffner added.

Safety issues aside, taste also goes downhill eventually when butter is left on the counter. Due to the high-fat content, butter is prone to oxidation and rancidity, which is why it will become "unpalatable," after that week or two mark, Schaffner explained.

Using an air tight container and cooler temperatures are also key to keeping up the fresh taste, plus you wouldn't want the butter to melt all over a hot counter anyway.

Lisa Tremain, spokesperson for Butter Bell, a company that makes insulated ceramic containers for butter based on 19th-century French "beurrier" crocs, said, "When we first launched our product line, back in 1996, we had many customers telling us how they had relatives (usually grandmothers) that would leave a stick of butter on a plate in the cupboard with a cheesecloth covering the butter. Unfortunately, that method doesn't preserve the butter for very long — especially if you are not using the butter too often."

"Leaving butter out on the counter instead of refrigeration," she added, "is nothing new."

This story was originally published April 14, 2017.

Russia takes war to 'different stage' and other developments