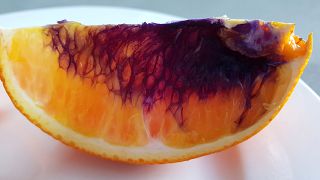 The cause was deemed to be harmless, but a quirk of simple chemical reactions.   -   Copyright  Courtesy of Annette Moffitt
By Ethan Sacks  with TODAY Food  •  Updated: 28/09/2018

By the very definition of their name, oranges are not supposed to turn purple.

But recently, an Australian mother stumbled on the discovery that it is quite possible for the fleshy part of the citrus fruit to change color — under a very rare and specific set of circumstances.

That chain of events began earlier this month when Annette Moffitt started slicing up a normal-looking orange as a snack for her 2-year-old son, Charlie. He chewed on half of the fruit's slices, leaving the remains and the rinds in the trash, while his mom put the other half in a bowl.

"The orange sat in a bowl overnight with some homegrown lemons, and fast forward to the next morning, while I was making a cup of coffee, I noticed that the orange had turned purple," Moffitt told TODAY Food by phone from her home in Brisbane, Queensland.

"I immediately checked on my two year old to make sure he was okay," she added.

Thankfully, Charlie was OK and "cheeky as ever" but the mother was still concerned about the startling color change.

A little internet sleuthing unearthed a similar incident of a purple transformation of an orange that occurred in Queensland three years earlier, but by the time that family had shipped the orange to government scientists for testing, the pigment had already faded, which meant the mystery had yet to be solved.

"I shared some pictures with my friends and connections on [Facebook], everybody came up with their own theories," said Moffitt. "There were no nerves, because my son was fine, it was more of a case of curiosity. I'm the kind of person who likes to know why things work."

Moffitt then shipped her puzzling produce to Queensland Health, a governmental health department, for analysis. For the agency's chief chemist, Stewart Carswell, said the sample proved a welcome change of pace from the regular blood, urine, soil and fish samples that are usually shipped to his department.

"We conducted numerous tests to find out why this orange turned purple overnight," Carswell said in a statement reporting his findings.

The verdict? The knife Moffitt was using proved the culprit in this whodunit.

It turns out Moffitt's husband had recently sharpened the blade, and the naturally occurring anthocyanin pigments in the orange reacted with iron particles on the knife to produce the purplish-blue color on the fruit's flesh.

"When they came back with their report, my first reaction was a feeling of relief that nothing sinister had occurred — that no one tampered with the orange," said Moffitt. "It was purely a natural occurrence, albeit a very rare one."

Moffitt had initially worried that by sharing her story, people would turn green with unease at the idea of eating oranges.

"In actual fact, I spoke to one of my friends and told her that I really hope it hasn't made people afraid to eat oranges," said Moffitt. "But she told me, 'Not all all. We've been buying them to see if we could replicate the same thing.'"