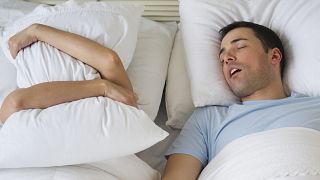 There are two types of snorers: Those who know they snore (a partner or family member told them so) and those who think they sleep soundly … But don't.

Nearly half of all adults snore, which is bad news for their partners and their general health. The body's reactions to snoring can lead to disrupted sleep and daytime fatigue (which comes with a whole host of other problems).

If you snore, or think you might, here's what doctors want you to know.

In simple terms, snoring happens when airways at the mouth and nose become compressed or smaller in size.

A person could be snoring simply because of the way their body's anatomy is structured, noted Dr. Douglas Kirsch, director of Atrium's Health Carolinas HealthCare Sleep Center in Charlotte, North Carolina.

"This is when there's something atypical about their airway, which means a person's chin is pushed back. Or they have large tonsils or their nasal airway is atypical," said Kirsch, who's the president of the American Academy of Sleep Medicine.

Persistent nasal congestion or having a deviated septum could also be the culprit. If you think your nose might be to blame, see an ear, nose and throat doctor.

Weight gain can also impact the way you breathe.

"As a person's body mass climbs, their airway starts to close up a bit," explained Kirsch.

As fat tissues grow, they shrink the size of a person's airway, causing tissue vibration.

Alcohol can also cause snoring, as it relaxes your throat muscles, reducing its ability to keep your passageway open. Sleep deprivation can also have the same effect.

What is actually causing the snore sound?

"Snoring is caused by airway resistance and vibration of tissues in the back of the throat. The parts of the airway that are involved include the tongue, uvula (hanging part in the back of the throat), soft palate (connected to the uvula) and the lateral walls of the pharynx," Dr. Neil Kline, a Philadelphia-based physician and CEO of the American Sleep Association, explained.

The "turbulence" and vibration in and near a person's airway produces that classic snoring noise, he added.

Should you see a doctor?

Dr. Daniel Barone, neurologist at Weill Cornell Medicine and NewYork-Presbyterian, said you might want to get checked out.

"Snoring by itself, it's not necessarily something that will hurt a person," said Barone. However, it might be a symptom of sleep apnea, which is more serious and requires professional help, he added.

Sleep apnea is when a person's upper airway becomes blocked repeatedly during sleep, reducing or completely stopping airflow, according to the National Heart Lung and Blood Institute. It can be related to obesity, heart or kidney failure, endocrine disorders and other more serious disorders.

To be sure, you should talk to your doctor.

In addition, if you're not sleeping well (general fatigue, feeling like you're tossing and turning a lot or getting up in the middle of the night to use the bathroom), snoring might be disrupting your sleep without you knowing it.

This can be a problem especially for people who sleep by themselves (who don't have someone to tell them if they're snoring.)

How to stop snoring?

One of the most immediate ways to snore less is to turn and sleep on your side, as opposed to your back. This prevents gravity from further compressing your air passage.

"Anti-snoring mouthpieces are also a popular option for reducing snoring. They work by moving the lower jaw forward, widening the airway. While they may resemble sports mouth guards, they are very different," Kline said.

But if you (or your partner) thinks it's a persistent problem, talk to your doctor. It's important to diagnose and treat sleep apnea, and only a medical professional can make that assessment.

"Is the snoring a marker of sleep apnea or is just snoring? The only way to tell is to do a sleep test," Barone said.

"Sleep health is incredibly important," Barone stressed. "It impacts so much of our daily life — everything your primary doctor looks at: high blood pressure, diabetes, risk of certain diseases, the list goes on."