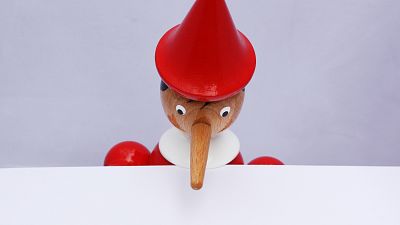 When it comes to spotting a liar, the key is to watch rather than listen.   -   Copyright  MaryAnnShmueli Getty Images
By Brianna Steinhilber  with NBC News Better  •  Updated: 21/08/2018

If you claim that you never lie, well, you're a liar.

Those little white lies are slipping out more often than you realize: One study found that Americans, on average, tell about 11 lies per week. Other research shows that number is on the conservative side. A study published in the Journal of Basic and Applied Social Psychology found that 60 percent of people can't go 10 minutes without lying at least once. And it gets worse: Those that did lie actually told an average of three lies during that short conversation.

In surveying more than 100 psychology graduate students currently or previously in therapy, Leslie Martin, PhD, of Wake Forest University's counseling center, found that of the 37 percent who reported lying, most did so "to protect themselves in some way — mostly to avoid shame or embarrassment, to avoid painful emotions and to avoid being judged."

60 percent of people can't go 10 minutes without lying at least once.

You know, like when you're too tired to go to brunch so you claim you have a stomach bug or you tell your boss you had train trouble when you really just overslept. Then there are the little fibs called pro-social lies which we are taught as kids are harmless. (Telling Grandma that you love the new sweater when you actually hate it, or telling your wife she looks great in that outfit, when you actually think she looks a little on the heavy side.)The problem with these little lies — which are harmless at first — is that they tend to have a snowball effect.

A study published in the journal Nature Neuroscience found that lying is a slippery slope: When people tell small lies, the brain becomes desensitized to the pang of guilt that dishonesty usually causes.

Basically, the more you lie, the easier it is to do it, and the bigger the lies get.

How good are we at detecting lies?

Research shows our accuracy of distinguishing truths from lies is just 53 percent — not much better than flipping a coin.

Chances are you're throwing lies around pretty often. But do you know when you're being duped?

A large meta-analysis revealed overall accuracy of distinguishing truths from lies was just 53 percent — not much better than flipping a coin, note the authors, psychologists Charles Bond, PhD, of Texas Christian University, and Bella DePaulo, PhD, of the University of California, Santa Barbara.

And it seems we're all equally as bad at identifying them: A 2014 study found that emotionally intelligent individuals are more easily duped by liars.

While letting these little white lies go isn't life or death (and honestly, we may be better off not knowing if our co-worker hates our outfit), there are more serious situations where vetting lies is an important skill. Say you have an underlying suspicion that your spouse is being unfaithful, or that your child may be engaging in dangerous activities behind your back

.Luckily there are active steps we can take to improve our lie detection radar. According to behavioral experts and professional interrogators, the key is to watch rather than listen. You may not be able to hear a lie but you can spot a liar by being aware of these nonverbal signs.

"In the world of behavioral analysis, baseline observations are the totality of observing nonverbal attributes absent the introduction of stressors and triggers. Most baseline measurements should be calibrated during non-confrontational conversation," says Roger Strecker, Sr., a trained Behavioral Analysis Interviewer/Interrogator with over 30 years of law enforcement experience, who is now the CEO of Ternion Risk Mitigation Group.It's especially easy to establish a baseline of behavior for those you are close to like spouses, children and friends."If you are using visual behavior to gauge the credibility of someone you know, you will also have the benefit of a baseline. Some people, for example, will never look you in the eye. For others, every interaction is a stare down," wrote Wendy L. Patrick, Ph.D., career prosecutor, behavioral expert and author of author of Red Flags: How to Spot Frenemies, Underminers, and Ruthless People. "Knowing how someone normally looks (or doesn´t) during in-person interaction can assist in judging the significance of deviations from the norm.

They say our eyes are the window to our soul - and when it comes to spotting a liar, studying the portal may lead you to the truth.

A study of people across 58 countries found that gaze aversion was the behavior that most people associated with deception. But is there any truth to this?Researchers say no.Science shows that liars do not avoid eye contact any more frequently than those telling the truth. The key thing to look for in eye movement is deviation from their baseline."We are always looking from deviation from baseline analysis, whatever the interviewee exhibits with respect to eye contact, focus and even dilation or constriction of pupils are assessed," says Strecker. "If eye contact was constant at onset of conversation then changed when a stressor or trigger questions was inserted, this should be noted as an attribute that could be a deceptive response."He also notes that how fast or slow someone blinks (and how that changes from their baseline when they say something you suspect to be a lie) is critical to observe.The caveat comes when there are very high stakes involved - say, cheating in a relationship or doing something in the office place that can cost you your job. In these situations, some studies have found gaze aversion to be linked with deception.

Research out of Stephen Porter's Forensic Psychology Lab at Dalhousie University found that the face will betray the deceiver's true emotion — "cracking" briefly and allowing displays of true emotion to leak out.

When people were instructed to lie, the researchers were able to discern rare "microexpressions," flashes of true emotion that show briefly, from one-fifth to one-25th of a second, on their faces."The face and its musculature are so complex — so much more complex than anywhere else in our external bodies," says Leanne ten Brinke, a graduate student in experimental psychology who collaborated on the research. "There are some muscles in the face you can't control … and those muscles won't be activated in the absence of genuine emotion — you just can't do it."The face will betray the deceiver's true emotion — "cracking" briefly and allowing displays of true emotion to leak out.

Dr. Porter adds that if someone is telling a really big lie with serious consequences, the face will definitely reveal the deception. "Because unlike body language, you can't monitor or completely control what's going on your face. This research was the first detailed experimental demonstration of the secrets revealed when people put on a 'false face,' faking or inhibiting various universal emotions."These tiny cracks lasting less than one-fifth of a second may leak emotions someone wants to conceal, such as anger or guilt. Experts do point out that signs of emotion aren't necessarily signs of guilt, but they may give you a peek into underlying emotions someone may be concealing."The facial expression appears to crack and another emotion leaks on the face, however briefly," says ten Brinke. "When you see a facial expression like this, you've got to probe with questions to find out why the person is feeling this way."

According to DePaulo's meta-analysis, liars are more likely to press their lips together, leaving their smile looking forced or tense.But it's not just about the lips — it is the mouth/eye combo that is key in spotting a liar."A truthful person smiles with their entire face, like the famous Mona Lisa," says Patrick. "Crow's feet indicate honesty."Social Studies

She stresses that while we tend to distrust people who are shifty-eyed, break eye contact or won´t look you in the eye at all, there are plenty of innocent explanations for this, whether they are shy, nervous or socially awkward. So focusing on someone's eyes when they smile is a great way to rule out these other explanations.There are seven human emotions, Stecker says: anger, happiness, sadness, fear, surprise, disgust and contempt. These come into play when someone is forcing a smile."We are now looking at the 'blended expression,' with the lower half of the face exhibiting the secondary human emotion and the upper facial quadrant exhibiting the primary human emotion," says Strecker. "The real smile will exhibit matching lower and upper hemispheres of human face, which match and will arguably be cataloged as happy." With a fake smile there is a disconnect between the eyes and the mouth. "The upper hemisphere or areas around the eyes may be exhibiting contempt, anger or disgust," he explains.

Look for signs of stress

So you're pretty sure your friend, boss or family member just lied to your face. You decide to press them on the issue by asking for clarification around the statement. Chances are, there are going to be some physical shifts that can clue you into their discomfort.Touching of the face is a 'pacifier' and has a calming effect to a brain under stress.

"The limbic and basal ganglia systems are two critical components of the human brain controlling processing of stress and visible nonverbal deception attributes humans exhibit," says Strecker. "Not commonly known, when the human brain is under stress, the brain temperature rises and often is exhibited as perspiration on the forehead or upper lip area of the face. Touching of the face is a 'pacifier' and has a calming effect to an otherwise brain under stress. Foot tapping or fidgety hands (when during baseline their hands, legs and feet were benign) should be noted."Of course this is dependent on the baseline — some people just have a habit of twirling their hair or touching their face. But Strecker says to be mindful of any changes in blinking speed, swallowing, facial hand rubbing, yawning, hair twirling or rate of breathing — all actions that may hint a lie is in process.

MORE FROM BETTER. What is gaslighting?

Five things you need to know about Ukraine war this Thursday