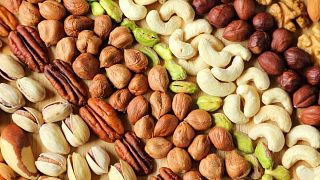 If you are going on a low-carbohydrate diet, better take it easy on the meat, too, experts advised Thursday.

Two studies found that people who replaced starchy foods with plant proteins such as nuts and legumes lived longer than those who loaded up on beef, pork or even chicken.

"Low-carb diets that replace carbohydrates with protein or fat are gaining widespread popularity as a health and weight-loss strategy," Dr. Sara Seidelmann of Brigham and Women's Hospital in Boston, who led the study team, said in a statement. "However, our data suggests that animal-based low-carbohydrate diets, which are prevalent in North America and Europe, might be associated with shorter overall life span and should be discouraged."

The team also found that, as is so often the case, moderation is the key. People who ate a moderate amount of carbs seemed to live longer than those who ate almost none, or those who ate mostly carbs.

It makes sense, Andrew Mente and Salim Yusuf of Canada's Population Health Research Institute, who were not involved in the study, wrote in a commentary in theLancet Public Health medical journal.

"This would translate to a generally balanced diet that includes fruit, vegetables, legumes, whole grains, nuts, fish, dairy, and unprocessed meats—all in moderation," they wrote.

For their study, Seidelmann's team first looked at more than 15,000 Americans taking part in a study of heart disease.

The volunteers filled out a food questionnaire in the late 1980s and were followed for 25 years.

The team also did what's called a meta-analysis, looking at data from other studies covering more than 400,000 people in 20 countries.

"A percentage of 50-55 percent energy from carbohydrate was associated with the lowest risk of mortality," the team reported in Lancet Public Health.

And what people ate instead mattered.

"Low-carbohydrate dietary patterns favoring animal-derived protein and fat sources, from sources such as lamb, beef, pork, and chicken, were associated with higher mortality, whereas those that favored plant-derived protein and fat intake, from sources such as vegetables, nuts, peanut butter, and whole-grain breads, were associated with lower mortality," the team wrote.

This fits in with what major medical groups all say. The American Cancer Society, the American Heart Association, the federal government and others all advise eatinga plant-based diet that puts fruits, vegetables and whole grains first, with meat and dairy making up only a small part of what's eaten, if at all. Vegetable oils such as olive oil should take precedence over butter or lard.

Why does it matter?

"Long-term effects of a low carbohydrate diet with typically low plant and increased animal protein and fat consumption have been hypothesized to stimulate inflammatory pathways, biological aging, and oxidative stress," the researchers wrote.

All those things can lead to cancer and heart disease.

"On the other end of the spectrum, high carbohydrate diets, which are common in Asian and less economically advantaged nations, tend to be high in refined carbohydrates, such as white rice; these types of diets might reflect poor food quality," they added.

Red meat tax could save thousands of lives but faces backlash