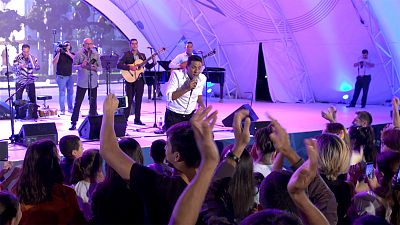 The Gabala International Music Festival in Azerbaijan has been celebrating its 10th anniversary.

The artistic directors of the festival are Farhad Badalbeyli, Professor and Rector of Baku Music Academy and the cello player and conductor, Dimitry Jablonski.

Euronews' cultural correspondent Wolfgang Spinder met the famous Russian-born musician, who lives on the border of France and Spain in a Catalan Village in Angoustrine-Villeneuve-des-Escaldes. We asked him to play some tunes on his unique cello, made in the 18th century by Italian luthier Joseph Filius Andrea Guarneri.

Dimitry Jablonski remembers very well the opening night of the festival: "It was a mixed group of people, Some people flew in from London, who usually go to Covent Garden or the Berlin Philharmonica. All of a sudden, they are sitting next to people who have come to the classical concert for the first time with their kids. I think we counted during one festival we had around 25,000 people in the audience, so its really quite remarkable."

Deep in the Caucasus Mountains...

The music event in the Caucasus Mountains started out as a pure classical music festival but opened over the years to other music genres.

This year there was a performance, from Cuba, "Jóvenes Clásicos del Son", meaning "Young Classics of Son." The "Son Cubano" is a rich music genre, which developed during the late 19th century, blending together many elements of Spanish and African origin.

Ernesto Reyes Proenza Cuba founded the band in 1994 in Habana. He says his country is nourished by many musicians of all genres: "A Cuban saying, that when you shout somwhere, you've got a musician."  Plus you have the "tres" which is our Spanish guitar, percussion, trumpet, all different genres of music. There is a natural music school in Cuba of all diferent styles."

Audiences from around the world

The local audience at the Gabala Music Festival and the tourists who come are mostly from Arab countries. While appreciating the Cuban music, they reacted quite reserved, but fortunately the younger generations could not resist the latino rhythms and got up to dance.

Amongst the highlights of the festival: an amazing performance by 'MultiPiano' ensemble from Israel: (https://multipianoisrael.com/about/.) They play with 8 hands on two pianos, sometimes even with 10 hands.

The 'MultiPiano' project was launched around 8 years ago under the umbrella of the Buchmann-Mehta School of Music, a joint institution of Tel-Aviv University and the Israel Philharmonic Orchestra.

Featuring some of Israel`'s best young pianists and their mentor, Tomer Lev, who's also Head of the Buchmann-Mehta School of Music.

He spoke to Euronews about the performance of playing with four hands on a piano: "It was particularly popular in the 19th century. There were ensembles that played house concert but this tradition was completely forgotten over the years. The aim of the MultiPiano ensemble is to bring back this art to the limelight."

Sahib Pashazade is one of the best Tar players. He tells Euronews: "Mugham music is very mystical, senstive and sensual. Mugham is a very philosophical music."

This music is a highly complex art form that weds classical poetry and musical improvisation, with the festival featuring some of the country's best musician and voices.

Rounding off Euronews' visit to the Gabala Music Festival, our cultural correspondent, Wolfgang Spindler says: "The festival, with its mix of classical music and world music, is very successful and attracts thousands of music lovers from accross the country and abroad."