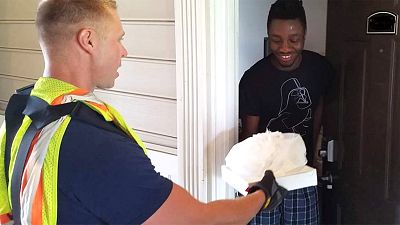 If its not delivery its Di...Fire dept?! Engine 642 responded to a motor vehicle accident this afternoon, where one of the vehicles was a pizza delivery vehicle. Once the patient was cared for and loaded into the ambulance the crew decided to finish the   -   Copyright  @HenriettaFire/Twitter
By Kate Holland  with TODAY Food  •  Updated: 27/06/2018

The Henrietta Fire District in upstate New York responded to a motor vehicle collision last Saturday — and ended up delivering a pizza.

Henrietta Fire Chief Mark Strzyzynski told TODAY that his team responded to an accident near the Rochester Institute of Technology involving a man making pizza deliveries. The man was loaded into an ambulance shortly after the HFD arrived on the scene.

After the dispatched team treated the patients, who sustained minor injuries, Strzyzynski says his team had no choice but to step up and finish the pizza driver's delivery.

Firefighter Jeremy Meisenzahl made the delivery himself.

"It was just an everyday, run-of-the-mill call," Meisenzahl told TODAY. "We were checking the air bags in one of the vehicles, saw the pizza sitting in the back and realized, 'This guy's a pizza guy!'"

Meisenzahl said his team grabbed the pie and brought it to its final destination.

"We try to make light of everything," Meisenzahl said. "There are a lot of jokesters around the firehouse and we thought, 'How cool would it be to get this guy his pizza?'"

Meisenzahl said the recipient came to the door in shock. Meisenzahl and two other firefighters then explained to him what had led them to his front porch, located down the street from the collision site. The man gratefully accepted his food.

"The recipient was very shocked when my guys showed up with his pizza," Strzyzynski laughed. "I think he was pleased that it was still warm."

A post on the HFD's Facebook page noted that the firefighters also thanked the customer for "deciding to order out and not risk burning food and setting off the fire alarm."