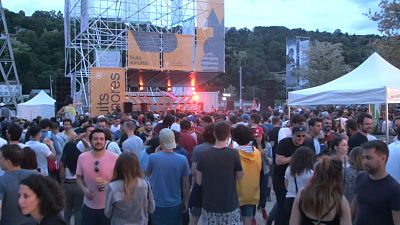 Lyon's electro music festival Nuits Sonores is in its 16th year. DJs and bands from all over the world are playing - day and night - in several locations across the French city.

This year there is a strong presence of female DJs like Iranian born, San Francisco-based Mozhgan Shariat.

Pierre-Marie Ouillon, Nuits Sonores programmes director, says the festival has succeeded in producing a balanced programme which shows how society and underground artists are changing their point of view.

"Today we see more women emerging," he explains. "And we are proud to say 'yes' we have equality of programming."

When Nuits Sonores started in 2003, it attracted 15,000 festival-goers. Last year, it attracted around 140,000 who came to Lyon to enjoy concerts by the best DJs and bands on the international music scene.

Euronews' Wolfgang Spindler says the festival has a vast program - techno, hip hop, house - but in the end everybody is there to have fun and dance until sunrise.