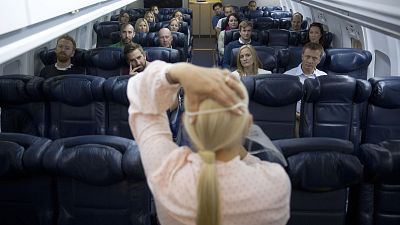 The tendency to zone out during the safety instructions is one that Jan Ibarra, a former flight attendant and supervisor, has observed among countless passengers.   -   Copyright  Matt Dunham AP
By Nicole Spector  with NBC News Better  •  Updated: 22/04/2018

I've always been an anxious flyer, yet when on a plane, I tend to pay little if any attention to the pre-takeoff emergency demonstration, and I've never once read the safety information card in the seat back pocket in front of me. I suppose my negligence is the result of my just assuming that if something does go horribly wrong, I'll know what to do from all the times I did pay attention to the safety demos in the past. I also tend to get trapped in a fatalistic sort of pessimism, reasoning that if something does go wrong, it will be a catastrophe so beyond my control that there will be little I can do.

After discussions with aviation experts, (based on but not exclusive to a recent deadly incident on Southwest Airlines flight 1380), I realized that by being negligent, I've been shrugging off my safety duties as a passenger. What's more, I've somehow been totally misinformed about the chances of surviving one of those unthinkable catastrophes. A 2001 NTSB study showed that based on plane accidents between 1983 and 2000, 51,207 of the 53,487 passengers involved, survived. That's 95.7 percent. The odds are tremendously in our favor — but we can't get lazy when it comes to the rules.

The tendency to zone out during the safety instructions is one that Jan Ibarra, a former flight attendant and supervisor for Pan Am and Delta for 28 years (retiring in 2006), has observed among countless passengers.

"People may be thinking 'How many times do I have to watch the same safety demonstration or video? We all know how to buckle our seatbelt, and we understand that when the mask drops down we're supposed to put it on before we assist others.' I think for the most part people are just bored by these demos."

Recognizing passenger's lackluster response, some airlines have tried to make these safety spiels fun or even comedic, a move that neither Ibarra nor Sara Nelson, the international president of the Association of Flight Attendants-CWA, AFL-CIO feels is the right direction.

"I see some airlines make these funny and silly videos to try an engage passengers, but I think that is not a good approach because then they may not take it so seriously," says Ibarra, with Nelson adding: "These videos can be filled with CGI and look more like a trailer for a movie rather than a serious demonstration, which it is."

As with those pre-flight safety demos, the FAA requires airlines to include an information safety card in all seat back pockets. It's critical to read this as it contains guidelines and details specific to the aircraft you're on.

"These cards show you where your exits are, and how to open the window exit," says Ibarra. "That's important and it's not an easy task. They're heavy and you have to rotate the handle and pull it inward. Depending on the aircraft, you'll either toss it on your seat or throw it out of the plane, but if you don't read the information card, you may not know what to do and it can be intimidating."

Suran Wijayawardana, a pilot and the COO of Alerion Aviation notes that passengers should "take the time to acknowledge the mask and reach down underneath their seat to make sure they know where the life jacket is. That way, in the rare case of an emergency, they know exactly where to find it and can keep confident in following procedures."

Trust flight attendants; they're trained to save your life

Flight attendants, with their spiffy uniforms and accommodating nature, may seem like the wait staff of the sky, but these professionals are trained to perform a range of medical tasks — from basic CPR to delivering a baby. They also know the ins and outs of the plane and receive annual training on safety.

Not only are flight attendants trained to save you, they may be trained to, well, kill you.

"After 9/11, I took voluntary self-defense courses at Delta," says Ibarra. "I learned so much from it, including two ways to kill people." And yes, that's with her bare hands.

The point is flight attendants can be your in-flight superheroes. Remember that when you're annoyed that the drinks trolley is coming down the aisle too slowly.

When seated, keep your seatbelt buckled

Often we only fasten our seatbelts when the light alerting us to do so is on, but we should keep our seatbelts fastened the whole time we're seated.

"I hate to think of it but had the woman who lost her life on [Southwestern flight 1380] not had her seatbelt on, she would have been out that window in two seconds," says Ibarra, while Nelson adds that other lives were likely saved by buckling up.

"In instances of a rapid decompression like [that on the Southwestern flight], people are saved because they have their seatbelt on," says Nelson.

Stay sober so you can be alert

Experts stress the importance of not freaking out if something goes wrong in the air, and also to remain completely alert. This means you shouldn't drink too much on a flight. Ibarra notes that flight attendants are trained to cut you off when you're had too much, but you shouldn't ever get to that point. Stay sober so that if in an emergency you can coherently follow all commands.

The passengers who stepped in to help each other on the Southwestern flight acted so bravely and that can't be underestimated. But in most emergency situations, it's not recommended to do anything other than stay seated unless the flight crew asks you otherwise. Frankly, trying to be of service can interfere with the people trained to help and distract other passengers from important messages.

"Flight attendants are trained to direct people and it is important to listen to those commands," says Nelson. "I don't pass judgment on the passengers [on that Southwestern flight 1380] and I know that had it not been for the quick response of passengers, that woman would have been swept out of the plane."

This incident should be viewed as an exception to the rule. In the vast majority of cases "it's best to listen to flight attendant instructions because we are trained to keep everyone safe," says Nelson. "Sometimes when passengers act on their own they could potentially be impeding that process."

I tend to dress purely for comfort on a plane, and usually by the time we've taken off, I've ditched my shoes for a pair of fat fuzzy socks. While flight attendants want us to sit back and relax, we may want to keep our shoes laced.

"If you're evacuating down a slide and running around form a burning aircraft you want to be in shoes that will let you run," says Ibarra. "You don't want to be in flip-flops or be barefoot. Sneakers are smart and also comfortable."

Marty Martinez, a passenger on flight 1380 famously documented his experience on the rapidly descending plane on Facebook live. This made for powerful viewing and surely the instinct to connect with loved ones during what you think could be your last moments, is an understandable one. But this is highly inadvisable.

While neither Nelson nor Ibarra wish to "shame" Martinez, they adamantly advise against such behavior.

"In any emergency you need to be listening for any information from the flight crew without any distractions," says Ibarra. "You also need to keep your laptop and other personal items stowed because that could all impede an evacuation where time is really of the essence."

NEXT: How to calm anxiety on a flight

Watch: What's it like to fly into one of the world’s most dangerous airports?