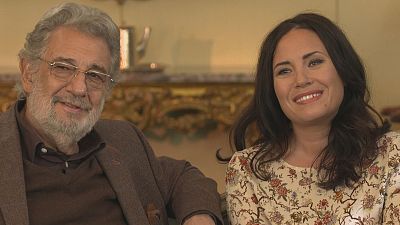 Plácido Domingo and Sonya Yoncheva, at opposite ends of their operatic careers, combine to perform Giuseppe Verdi's epic, "Luisa Miller". It is a heart-wrenching tragedy about fatherly love, which has been illuminating New York's Met Opera with its sensational cast.

Verdi has always played an important role in Plácido Domingo's career, performing more than 20 of his characters. He shares with euronews some insights about the iconic composer and his prodigy, Sonya Yoncheva, who previously won his prestigious opera competition Operalia in 2010.

Plácido Domingo says; "Verdi is so magnificent in any period: the early Verdi, the medium Verdi, the mature Verdi, the last Verdi - all the operas are phenomenal."

Plácido explains what makes Verdi and his music so special:

Sonya Yoncheva also tells euronews why her debut performance has been such an amazing experience.

She says; “You could hear everything that I have learned from him. Because he is talking to you like this but when we are rehearsing it is the same. We are all absorbed by his energy, really."

Plácido in his 49th Opera season

Plácido Domingo says he believes his prodigy, Sonya, has an incredible talent and an extremely bright future.

Plácido:"I was very lucky to hear her from the very beginning because we are so proud that she is a winner of Operalia. I'm so happy, it is so inspiring to sing with an artist that is so deep, with such a technique, with such a feeling.”

Sonya says how honoured she is to perform alongside the legendary Plácido for her debut performance: "Placido is an incredibly generous artist and he kept this all these years and for me, all this earthly energy comes from the simple things. But it makes life so much more beautiful, it is so precious."

Plácido: "You try too, of course, to pass something that you have learned before to the young generation you know. Since I'm now in my 49th season at the Metropolitan Opera."

Sonya:"We wish this future for us too."

The final performance of "Luisa Miller" at the Metropolitan Opera takes place on April 21st.

“The sound of everybody is amazing”, said Plácido Domingo about the exceptional gala at La Scala