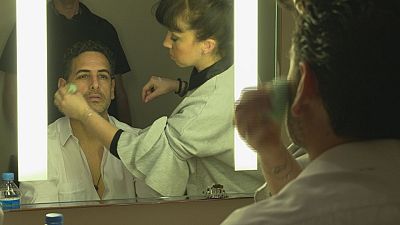 Jacques Offenbach died before the premiere of his opera 'Les Contes d'Hoffmann' and never completed the scores.

As a result the masterpiece is among the most edited operas in history.

Significant changes were made for a 1904 production at the Monte Carlo Opera, an interpretation which would go on to become the most recognisable version.

According to Juan Diego Florez, the world renowned tenor who takes the lead role in Offenbach's fantastical odyssey, the theatre is drenched in operatic history.

He said: "This theatre has some history related to Hoffmann. It was here that the last version of the Venetian act - 'Guilletta's act' - was rearranged and the impresario of this theatre at the time composed a septet which always features in the opera nowadays."

Similarly, director of the Monte Carlo Opera and stage director of 'Les Contes d'Hoffmann' Jean-Louis Grinda acknowledged the theatre's importance in the completion of the great unfinished score.

"The Venetian act was never played at the premiere because of the lack of scores," he said.

"The genius former director of the Monte Carlo Opera, Raoul Gunsbourg, decided that, with his help, a French composer should write the music that was missing.

"Others wrote some parts, in particular the 'Scintille diamant' aria and the famous septet which was left uncompleted by Offenbach."

Part of the famous Monte Carlo Casino, the opera house - also known as the Salle Garnier after its designer Charles Garnier - is known for being an intimate venue.

With just 524 seats, compared to it's 2,000 capacity sister venue - the Palais Garnier in Paris - Florez describes the space as a "jewel".

"This opera house is special because it's small," he said. "It's a beautiful masterpiece architecturally."

"And of course, for the singers to sing in such a box - like a bon bon box - it is wonderfful because we feel that our voices are carrying. We feel that everybody hears us and we don't have to push. It's a great theatre for the voice."