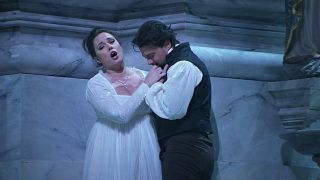 Sonya Yoncheva’s sublime performance as Tosca, the main character of Puccini’s masterpiece, has been the highlight of New York’s opera scene this January.

"Oh it's a huge part! It's really exciting singing this and it's super challenging, to act and to sing. So for me it's really special to do it, really."

The Bulgarian soprano has taken on the role of the ill-fated diva at the Met for the first time, but her interpretation is far from that of a debutant. The drama unfolds in Rome, June 1800, as the city is threatened by Napoleon’s invasion of Italy. Tosca is in love with artist Mario, suspected of aiding a political fugitive.

“Tosca is a very young woman, she’s in love for the first time,” Yoncheva says. “So for her, these kind of explosions she has, these kind of reactions she has, so strong and so powerful are because when it comes to defending your love, she just throws out words like that!”

But the storm clouds are gathering for the couple.
Tosca is also coveted by Scarpia, the police chief, who is scheming in the shadows to catch his prey.

Serbian baritone Željko Lučić is no stranger to the role, having performed it on numerous occasions.

“What we all know about Scarpia is that he’s extremely evil, Lučić says. “It’s almost an unwritten law that tenors and sopranos are good guys, and there’s always one little baritone who is trying to spoil all this atmosphere between the two of them, which is exactly happening in this opera. In this production, it’s made in a pretty new way of directing which I would call classic!”, Lučić adds with some irony. “I absolutely adore it because the costumes and set, everything around you is original.”

As the drama deepens in Act II Yoncheva says the challenges of her role intensify: “The second act is really, really challenging. It’s a very dramatic part, you really need all your colours with you. I’m trying to calculate my power and the force.”

And the character of Scarpia also becomes more nuanced as the plot develops, according to Lučić:
“Everybody thinks that 60-70% of the role is screaming, yelling, but no. He’s very secure, very solid in his darkness.”

Yoncheva is very conscious that mastering Tosca is a hugely significant event in a soprano’s repertoire.

“Oh it’s a huge part! It’s really exciting singing this and it’s super challenging, to act and to sing. So for me it’s really special to do it, really.”

Prepare for the Met Opera's new “Tosca” with YouTube clips we watched this week https://t.co/cMRdrHadIN

As it does with many operas, The Met will broadcast this brand new production by David McVicar live in cinemas in several countries across the world on January 27, ensuring Yoncheva’s eye-catching performance will not be restricted to the lucky few who have tickets to the iconic New York venue.