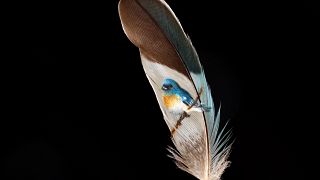 Turkish painter Hasan Kale has been painting scenes from Istanbul on miniature objects for the last 22 years.

He’s known as Turkey’s "Microangelo". A razer or a pumpkin seed is not even the smallest canvas Hasan Kale has worked on. He makes use of any object or food big enough to paint a scene on from his hometown: lipsticks, bottle caps, even a tooth.

This art is literally breath-taking. The artist says needs to hold it when performing tiny movements with the brush.

"Of course the only hindrance here is that you can't hang it on your wall and (look at it) while you sip your coffee. You have to submerge in it," Kale said.

Celebrating his 22nd year as a micro-artist, Kale said he has so far painted on 350 different objects, but said one of the biggest challenges of using food as a canvas is that his micro pieces may not always last for long.