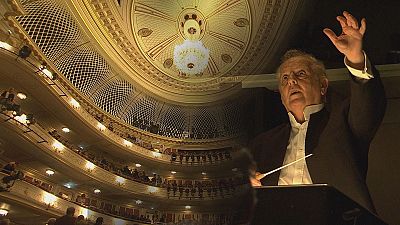 Over the course of its 275-year history, the Staatsoper was destroyed three times.

“I feel like I am part of an extraordinary moment in the history of music: the re-opening of the Staatsoper in Berlin,” says Franco-Danish soprano Elsa Dreisig, the winner of last year’s Operalia, who dazzled the audience on opening night. On the programme: Robert Schumann’s masterpiece ‘Scenes from Goethe’s Faust’, for which the composer chose particularly intense moments of Goethe’s epic drama and set them to music.

“It’s a piece that Schumann worked on for over ten years, it’s wonderful music,” says music director Daniel Barenboim. “It’s not an opera. It is like a visionary, imaginative staged version of an oratorio.”

For Elsa Dreisig, “the best thing about Schumann is the harmony. It’s a piece that requires a great deal of internal maturity. You can really feel the dilemma he’s going through, his internal conflicts. There are moments of immense sadness.”

Schumann’s masterpiece resonates thanks to the opera house’s phenomenal new acoustics. The original ceiling has been raised by several metres and a ceramic net has been installed. In the gallery behind, the sound is distributed evenly.

“Sound needs to endure,” says Barenboim. He claps in his hands. “Sound dies easily, just like that (he claps again). So, good acoustics need to allow both complete transparency – where you can hear every detail – but also a sufficiently long reverberation time that will carry the sound.”

“I think that, as artists, we are entrusted with a beautiful mission, which is to breathe life back into this place, to bring back its artistic soul,” says Elsa Dreisig.

At the core of the Staatsoper’s identity is a strong house ensemble, led by Barenboim himself. “This (the ensemble) is my achievement over the past quarter of a century. It was always important for this house to find new, young singers and to give them a basis to grow and that is what I want to carry on,” he says.

After ‘Scenes from Goethe’s Faust’ ends early October, performances will be suspended for another two months to give technicians time to master the new computer-controlled stage equipment.