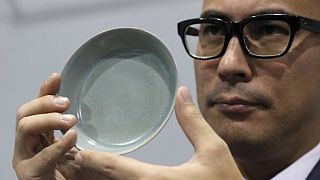 It’s the kind of dish you don’t want to break.

A 900-year-old bowl shattered auction records for Chinese porcelain when it sold for HK$294.3 million (around 32 million euros) this week in Hong Kong.

The small, 13-centimetre dish was made during the late Northern Song Dynasty — between the 10th and 11 centuries — in the most prestigious imperial kiln known as the Ru ware.

It was picked up on Tuesday (Oct. 3) by an anonymous buyer after a 20-minute bidding war.

Sotheby’s Asia Deputy Chairman Nicolas Chow would not reveal the nationality of the buyer, but said mainland Chinese interest had helped drive the price tag up.

“Every time there is a piece of Ru-ware, which is – you know – an extremely unusual occurrence, there’s always a battle, because it is the most talked about, the most celebrated of all wares in the history of Chinese ceramics,” said Sotheby’s Asia Deputy Chairman Nicolas Chow.

Items made by the Ru are extremely rare because the kiln is believed to have crafted items for less than 20 years.

The record-fetching “brush washer” — used at the time to wash calligraphy and painting brushes — is believed to be one of just four pieces of heirloom Ru ware in private hands.

Such Ru wares are recognisable for their fine irregular cracks and cloudy blueish glaze.

The previous auction record for Chinese ceramics, also set in Hong Kong, was held by a tiny and more than 500-year-old imperial cup painted with chickens, which sold for HK$281.24 million (around 30.7 million euros) in 2014.