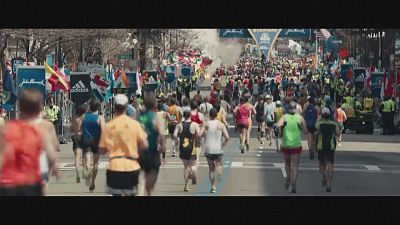 Actor Jake Gyllenhaal has made room on his mantelpiece for the Golden Eye Award for achievement in film at the Zurich Film Festival.

“It’s lovely to be recognized for your work,” he said. When receiving his award, he joked about finally having a Golden Eye – something he had been looking for all his life, as he is legally blind without his contact lenses.

Gyllenhaal’s latest movie, “Stronger,” about the 2013 Boston Marathon bombings, is based on the bestselling memoir of the same name by Jeff Bauman, who lost his legs in the attack.

The movie, which is directed by David Gordon Green, has been warmly received by critics, who have praised its uplifting, inspirational story. Gyllenhaal himself was surprised at the humor in the story.

“I think when I read the first draft of the screenplay, I was struck by its humor and I didn’t expect myself to be laughing…and it transcended the situation to making me feel about people who I love who are suffering…when they felt like they couldn’t keep going that, you know, Jeff’s story kind of makes you feel like you can, and I think that that felt to me like a very important story to be telling nowadays.”

Bauman, who uses prosthetic legs, became close to Gyllenhaal during filming and the two remain friends. Gyllenhaal told guests at the ceremony that he had learned a great deal from Jeff Bauman.

‘Stronger’ is currently showing in the U.S. and Canada. It will be released in France next month (October 2017), and in Ireland in December.

“Gyllenhaal’s acting in Stronger is the most challenging and revealing work he’s done in years.” #StrongerMoviehttps://t.co/HW3uAOFgVX

I lost my daughter in a terror attack. Here’s what I’ve learnt about coping with tragedy | View