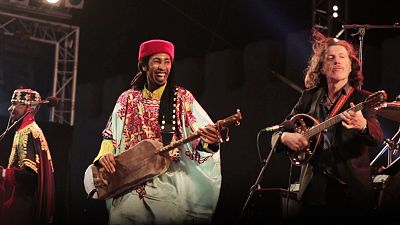 Every year over the course of three days the heart of Essaouira in Western Morocco beats to the rhythm of the traditional Gnaoua music – a rich repertoire originating in West Africa that combines ancient African Islamic spiritual songs and rhythms with ritual poetry and acrobatic dance.

To mark this 20th edition and in keeping with tradition, musicians from around the world were invited to take part in the Gnaoua Music Festival’s multi-cultural jam sessions.

Brazilian musician Carlinhos Brown opened the festival with his tropicália, reggae and traditional percussion, joining up with Maâhlem Saîd and his brother Mohamed Kouyou on stage.

“To play with the masters and the gnaoui is a dream come true for me,” he told Euronews’ Wolfgang Spindler.

“It was great, we have been rehearsing intensively for two days and thanks to God we gave a great concert tonight,” said Mohamed Kouyou. “We want to thank Carlinhos for playing with us.”

Band of Gnawa, which mixes Gnaoua and rock, was back on stage in Essaouira a decade after it was born at the festival. The band performed a medley of rock classics to the delight of the crowd.

“You know, I first came to Morocco when I was 21, so that’s 45 years ago,” said the band’s artistic director Loy Ehrlich. “That’s when I discovered Gnaoua – in the Seventies – and it’s stayed with me ever since.”

Over time, Gnaoua has blended with other music styles, such as blues and jazz, building bridges between cultures.

Contemporary blues legend Lucky Peterson – the master of the electric Hammond organ – was among the guests invited for this special anniversary.

“It’s my first time (playing Gnaoua) and I like it I like it a lot,” he told Euronews. “It’s all about God, it’s all about love and it’s all about feeling. And we have the feeling on the inside of us and that’s where the music comes from.”

A child prodigy, Lucky Peterson was discovered at his father’s nightclub in Buffalo at the age of five and went on to record his first album.

French musician Titi Robin is the master of cultural blends, whose musical world is rooted in the Mediterranean. He performed alongside musicians from Morocco, India and Pakistan.

“Moroccan culture, the culture of southern France, to the East of the Mediterranean all the way to India… they have always interacted a lot when it comes philosophy, poetry, music, and we are very much aware of that richness, it’s what carries us,” he said.

The event has grown to become a major player on the international world music festival circuit with this 20th edition drawing some 300,000 people to Essaouira.