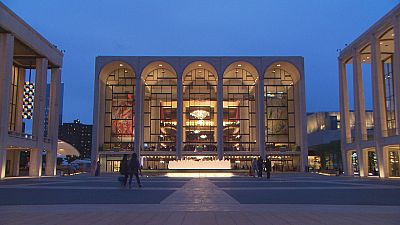 It’s one of the most prestigious opera houses in the world and it’s celebrating fifty golden and glorious years at the Lincoln Center in New York.

The Metropolitan Opera House, or simply the Met, marked the occasion, a jubilee event on May 5, with a grand evening of 31 operatic numbers over five hours in front of 3,800 fans. Formed 134 years ago, its first season at the Lincoln Center was in 1966.

Forty icons of opera interpreted excerpts from the Met’s past – and upcoming – repertoires.

Among them was renowned tenor and conductor Plácido Domingo. The singer interpreted an extract of Andrea Chénier, the 1896 opera by Umberto Giordano – “Nemico della patria” – as well as “Baigne d’eau vos mains” by Jules Massenet’s Thais, in a duet with American opera star Renée Fleming.

Plácido Domingo, opera tenor
“I’m very proud to participate tonight and with so many great, great colleagues. Next year in September will be my 50th anniversary with the Metropolitan Opera.

“During 50 years I have been opening the Metropolitan Opera in 21 occasions. I have over 750 performances plus conducting also over 100, so it has been a whole life really. I feel like at home.“

The Met’s general manager, New York-born Peter Gelb, recalled a vivid memory of his first experience of the hall, soon after its inauguration.

Peter Gelb, general manager of the Met
“When I was 13 years old, my parents brought me to the Met and I actually sat in the box of Rudolf Bing who had the job that I have today. At one point during the performance someone booed and Bing reacted by jumping up and running out of his box to reprimand the offending members of the audience. Little did I know of course that some day I would be sitting in the box that he sat in but now as the general manager myself.“

Sonya Yoncheva
“They did something really fantastic with the lights so we could appear in La Bohême like in a film. We had this net in front of us, because there was the projection and we had to transport all these people in the hall into the unique and iconic production of Zeffirelli.

“I first sang at the Met in 2013. I remember feeling very bold to be here, because being at the Met is not only being in the most incredible theatre in the world today, but also it’s about self-confidence too, how strong you are, can you do it or not?“

Joyce DiDonato
“Oh, it was thrilling! I tell you, it was one amazing performance after the next. We were sitting in the backstage area, screaming for each other, oh let’s hear this one, this one!…

“And it felt like this wonderful mix of what opera is, which is a real salute to tradition but also in a modern sense. And it was… It was family tonight.“

Richard Wagner’s Tannhaüser Chorus from 1845 was one of the acts performed as was “Cortigiani, vil razza dannata,” from Verdi’s “Rigoletto” by Russian Dmitri Hvorostovsky. The baritone has been battling brain cancer and was not scheduled to sing, making his brave appearance an unforgettable one, on a night to remember. Designer Julian Crouch, lighting designer Brian MacDevitt and their staff created a multitude of sets using projectors and virtual installations.

The career of James Levine, conductor and honorary musical director of the Met, was also honoured for his 40 years of loyal service. He was back in a wheelchair that night to direct “Thais“ and the choruses of “Aida“ by Verdi that closed the evening. Canada’s Yannick Nézet-Séguin is set to take over the Met baton to kick-start the next 50 years.

A life in opera