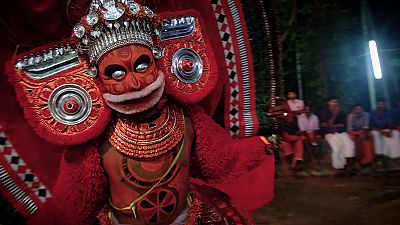 In Kerala, a state in South India, the tradition of Theyyam is still alive.

The ritual form of worship involves customs that some say date back as far as neolithic times.

These rituals, practised across North Kerala’s Malabar region, are rooted in the natural world.

Over 400 performances depict gods and goddesses, spirits and ancestors, animals and trees.

Annooran Balan Nenikkem, a senior Theyyam artist, said: “Every community has its own unique rituals.

“When these rituals are performed, after lots of preparation, they believe this is a God – this is the truth.”

Balan has performed Theyyam rituals since he was 12, and today he passes on the knowledge to his grandson.

“There are no schools to teach Theyyam,” he added.

“The training begins in a traditional sense. When the elders perform, the students watch how it’s done and learn through observation and repetition.”

Please RT if you like!! #Travel Theyyam | Tewfic El-Sawy https://t.co/B2gCxYd755pic.twitter.com/8pvVSK3Ji1

His grandson Annooran Karthik said: “Before I used to go with my father to watch Theyyam performances. After watching it a lot, I came to like it.

“When I got older, I went to help performers. Then I asked to be a part of the performance.”

For over 300 years, the Krishnan family has organised the annual performance at their family estate.

Krishnan said: “My great-grandfather, grandfather, father – for three generations our family has a tradition of Theyyam rituals at our ancestral home.

“People come from far and wide. Their happiness is our happiness.

“If their prayers bring them a child, for example, they will pray for us.

The North Kerala Ritual of Theyyam {} Cocooned in blissful isolation between the verdurous Ghat mountains in the e… https://t.co/n50FuJ28WIpic.twitter.com/kGT4APXZNG

“God will bless them. And their blessing will be ours too.”

Preparations begin hours before the performance with artists creating elaborate costumes made from palm leaves.

Breaking from traditional roles, Theyyam performers are from the lower castes of Hindu society.

Upper caste Brahmin priests like Krishnan invite them to perform the Theyyam rituals.

Krishnan added: “They might be from the lower caste. But the moment the performer transforms into the deity, he becomes even higher than us.”

Late into the night, the drums beat in rhythm as the performance gives way to a trance that can last until daybreak.

It is believed at this point the performers are no longer men, but have transformed into Gods and the crowds are eager to seek their blessings.