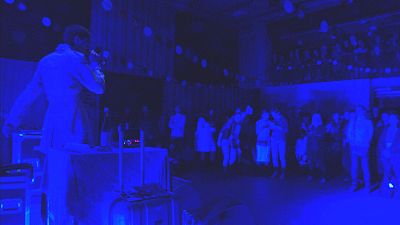 This year’s event features an eclectic programme of 237 artists from 33 countries at venues spread across the city.

Mart Avi, a 25-year old Estonian, borrows from the 80s with his staged, synth based pop: “Some of these aren’t really my stories they are like characters I play different characters and they have their own backgrounds,” the young Estonian is a fan as well as performer:
“Well, the best: Bowie, Prince, Miles Davis. The best,” he admitted.

Estbel, the name gives it away, are a Belgian, Estonian collaboration, made up of two Belgians and two Estonians, all four harbour a love for traditional music and instruments.

He explained how he got into the business:
“Basically I was doing music from my very young age Than I went to study classical composition and once I was doing that I realised Pop music is kind of fun as well but making pop music particularly I finished university and I actually thought, this is what I’m gonna do. I utilised all my classical training.”

C Duncan’s second collection is ‘The Midnight Sun’ named after an episode of the
‘The Twilight Zone.’

He is due to tour the UK in May.

First Listen: Hauschka, 'What If' https://t.co/s9lUvRw9NDpic.twitter.com/rn0FYuFze7

The experimental pianist received his nomination for the soundtrack to the film ‘Lion,’ staring Dev Patel, Nicole Kidman.