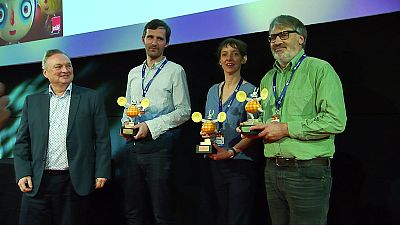 Every year over 700 professionals come to the French city of Bordeaux for the European pitching and co-production forum for animated feature films – Cartoon Movie.

During the two day event, the best European film director, film distributer and producer were honoured.

The aim of these “Cartoon Tributes” is to reward outstanding achievements, companies or personalities that have had a positive and dynamic influence on the European animation industry.

European Distributor of the Year

Danish arthouse film distribution company Angel Films received a tribute as Best European Distributor of the year. Since its foundation in 1988, the company has offered high quality films to the Scandinavian market, such as “My Life as a Courgette”, “Phantom Boy”, “Ernest & Celestine”, “Pinocchio” and “Tad, the Lost Explorer”.

European Producer of the Year

The co-producers of “My Life as a Courgette”, Rita Productions (Switzerland), Blue Spirit Productions & Gebeka Films (France) were honoured as Best European Producer of the year.

Rita Productions is an independent production company founded by Max Karli and Pauline Gygax in 2003, based in Geneva. Since then, the company has produced documentaries and features for European and international markets. “My Life as a Courgette” was the company’s first animation film.

Blue Spirit Productions is a French production company known for its animated TV series and features, among which the award-winning feature “The Painting” (“Le tableau”). They have production studios in Paris, Angoulême and Montréal.

Gebeka Films is a French distributor of high-quality films for a young audience. For “My Life as a Courgette”, the company was co-producer. In the past Gebeka Films has also distributed successful films like Kirikou and the Sorceress (Michel Ocelot), The Three Robbers (Hayo Freitag) and Brendan and the Secret of Kells (Tomm Moore).

Claude Barras was honoured as Best European Film Director of the Year for “My Life as a Courgette”. It is the first feature animation film for the Swiss director. The stop motion animation film has had huge success since it was screened in the Directors’ Fortnight section at the 2016 Cannes Film Festival. In the same year the film won the Cristal Award for Best Feature and the Audience Award at Annecy International Animated Film Festival and received Best European Animated Feature Film prize at the European Film Awards 2016. The animated comedy-drama was also nominated for a Golden Globe Award and for an Oscar for the Best Animated Feature Film at the 89th Academy Awards.

Since 1999, over 275 films pitched at Cartoon Movie, with a total budget of 1.9 billion euros, have secured their financing thanks to this annual forum aimed at strengthening the production and distribution of animated feature films in Europe.