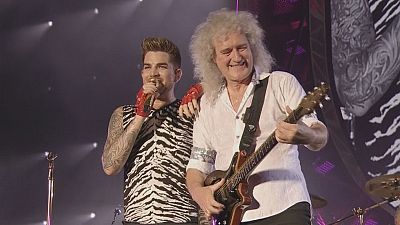 Queen has announced it will be hitting the road again this summer with singer Adam Lambert.

Together the group will tour 25 cities across North America.

They’ll be taking a fresh look at classic Queen hits such as ‘We Are The Champions’ – which attracted attention last summer when Donald Trump walked out on stage to the tune at the Republican National Convention.

“We didn’t write a political song, in that case, it was for entertainment,” stressed Roger Taylor.

“It is kind of an abuse, really, I thought. The song is about people, ‘we are the champions’.

‘It is really a song about bringing people together, it is not a song about ‘I am the greatest.’ Yea, we felt it was an inappropriate use of the song and it kind of demeans us to have people use it that way,” added Brian May.

Queen + Adam Lambert have announced a 2017 North American tour. Are they coming to your city? https://t.co/lw7ZJlV1PBpic.twitter.com/YqAyQ0BpWY

The group has already performed together at sold out concerts across the world.

Lambert first performed with Queen as a finalist on American Idol in 2009.

The collaboration was so memorable that it eventually led to Lambert joining the band as its lead singer a role once which the iconic Freddie Mercury once performed in his own unique way.

“Adam, because Adam doesn’t have to try and emulate Freddie whatsoever, he just is himself and it works for us for the same reasons that Freddie worked with us, he has the voice beyond question, the voice from God, and he has the ability to entertain, the ability to be funny, to be humble, to be big and to connect and so the front man, the singer, is always the connection, the prime connection with your audience and Adam just does that. Without even thinking,” said Brian May.

The North America tour will begin in Phoenix, Arizona on the 23rd June, before stopping in California, New York and Chicago.