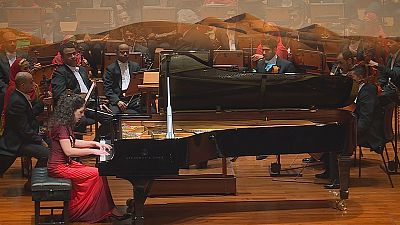 At the heart of Oman’s capital, lies a “cathedral” of music: the Royal Opera House Muscat.

In a country which is made up mostly of desert there stands a refined, state-of-the-art performance centre whose hall hosts the greatest stars such as Plácido Domingo. He recently conducted the Oman Orchestra, and accompanied Beatrice Rana, the internationally acclaimed Italian pianist, in Tchaikovsky’s Piano Concerto no. 1.

“My relationship with Tchaikovsky’s Concerto is a love-hate one, like all strong relationships; there are times I deeply love it and I feel I could not live without it, and times when I simply can’t stand it… “

“Luckily, this is one of those times I do love it! It is certainly one of those pieces you ‘grow up’ with; its architecture is gigantic, with thousands emotional nuances, and lots of musical places hidden away… which really gives you a chance to endlessly ‘explore’, and somehow rediscover this music.”

Going over some last notes with. BeatriceRana</a> for tonight. <a href="https://twitter.com/ROH_Muscat">ROH_Muscatpic.twitter.com/SxIU39rHB1

“Truth is I found her amazing, just amazing! Besides, Tchaikovsky’s Concerto is extremely difficult, and being able to interpret it that way at only 24 years of age… for me it was a most pleasant surprise! And, despite her youth, she’s already one of the greatest pianists around… One can only wonder how far she’ll get!”

“Frankly, there’s nothing natural in performing as a musician; I’m not talking about doing music but about the ‘job’ itself. I do think that honesty is paramount when you sit in front of an audience and you expect them to keep quiet for two hours, as well as claiming to have something extremely interesting to say. Hopefully, when you’re honest enough to say: ‘hello, this is just me, I’m really trying to communicate to you what I sincerely think about this music’, then you have a chance to be – more or less – on the same level as the audience.”