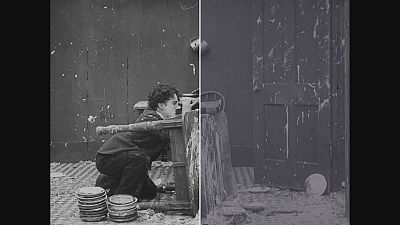 Eighty years after Charlie Chaplin made the movie classic ‘Modern Times’, the great clown’s movies are being restored at a laboratory in northern Italy.

L’immagine Ritrovata which was started in 1992. Then there were many labs restoring feature and commercial productions but none for motion pictures which is a specialist area.

Individual frames from classic films are treated allowing the movies to be conserved for future generations to enjoy the stars of the golden era of the silent movies.

“Restoring Charlie Chaplin movies was very emotional both for me and my team. Handling the camera negative of ‘Modern Times’ is an unforgettable emotion for movie buffs and for anyone who studied that movie.

‘It was like when we had the negative rolls of the Lumière brothers motion pictures, the first one in motion picture history,” explained Davide Pozzi, Director of L’immagine Ritrovata.

The most difficult Chaplin movies to work on were the ones from the “Keystone period”, 35 films from 1914. The series had been considered incomplete.

Rare footage from our archives of Chaplin reading his fan mail. Look where he keeps his Tramp costume! https://t.co/Xw2n5TEiJ6 via YouTube</a></p>&mdash; Charlie Chaplin (ChaplinOfficial) December 22, 2016

Before the technical restoration could begin experts at the laboratory spent a year of research and comparison of movies in archives across the world.

And one of the biggest revolutions in the history of films – the arrival of the digital age – is helping to preserve the past.

“Before this all elements of the motion picture industry, sound, colour film and panoramic formats stood inside 35mm of space. With digital everything became a file. The biggest revolution in motion picture history. Everything changed, both production and restoration.

‘Today L’immagine Ritrovata is a laboratory which keeps these two aspects of the industry. One one side we are still deeply into analogue, for conservation and preservation, but on the other side we are happy to be able to use digital tools to restore pictures,” Davide Pozzi pointed out.

By the 1980s, it was realised classics were at risk of becoming lost. The demise of film has often been heralded, but now it is certain digital solutions will help to secure its future. These 21st Century scientists are ensuring the legacy of the early 20th Century’s most creative minds.