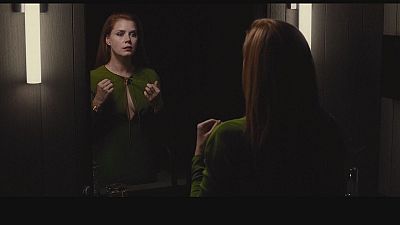 Seven years after making his directorial debut with the critically acclaimed ‘A Single Man’, fashion designer turned film director Tom Ford is back with ‘Nocturnal Animals’.

Ford’s psychological thriller stars Amy Adams as Susan, a gallery owner who thinks her ex-husband’s (Jake Gyllenhaal) violent novel is in fact a veiled threat and a symbolic revenge tale.

Ford, who also wrote the screenplay and produced the film, believes he was very fortunate to get the actors he wanted cast: “I like enhanced reality. When I watch a film I want the people to be more beautiful than in real life, I want everything to be slightly exaggerated and Amy was the very first actor, who I was lucky enough, to attach to the project…”

“This woman is reading a book for a good part of the film and Amy is able to really telegraph what she’s feeling and thinking with her face and with her eyes. I also wanted her character to be sympathetic and there’s something about Amy’s eyes that you just can not feel for her,” added Ford.

By exploring Susan recollections of her first marriage and her discovery of hidden truths about herself, the film takes the viewer on a trip from the past to the present, mixing the story of the novel with the celluloid reality.

Adams says at first she found it hard to get into her character’s head: “I loved the idea that Tom had of traveling through present and past and story and reality. And I loved the idea that he had of consequences of actions and how we then live with our consequences. But, I have to admit, when I first started working on Susan, I felt very distant from her and I wasn’t sure how I was going to get into her. Then I realised that everything that I was judging her about, she’s judging herself about, so I was able to use my own preconceived notions about the character and use that as a starting point.”

The movie is on staggered release across Europe from mid-November.