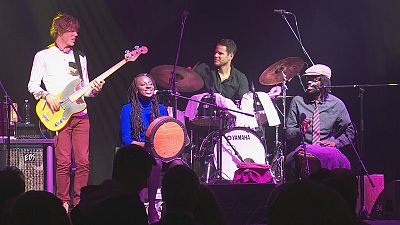 Featuring artists from all over the world, from South Korea to Norway via Turkey or Senegal, the Budapest Ritmo festival was a celebration of world music.

We grow, we meet new people, we eat new food, the inspiration changes. Also, for the instrument that I play, it has been predominantly traditional, so it's very important to take it to new music places and experiment with it.

Monoswezi is a collective of musicians from Mozambique, Norway, Sweden and Zimbabwe, with a common passion for traditional African music.Singer Hope Masike is one of a handful of female players of the mbira, a kind of thumb piano: “We grow, we meet new people, we eat new food, the inspiration changes. Also, for the instrument that I play, it has been predominantly traditional, so it’s very important to take it to new music places and experiment with it,” she told Euronews reporter Gábor Kiss.

A woodwind and brass band from Austria, Federspiel – from the word ‘Feder’ which means ‘Feather’ – is a joyous mix of Mexican melodies, Austrian yodel and Balkan brass. Band member Simon Zöchbauer plays the trumpet.

“(As a brass band) We are supposed to have a massive, big sound – like really loud. And we are like that, but we also have a “feather” side, which is playful, light and soft,” he said.

The festival was also a chance for Hungarian folk divas Ági Szalóki, Dina Pandzarisz and Mónika Lakatos to introduce their new project: a fusion of Hungarian folk music, Sephardic Jewish songs and Vlach Roma melodies. The result is a moving combination of sounds.

Torgeir Vassvik comes from a village in the north of Norway. His band keeps alive the ancient Sami culture with the yoik, the oldest vocal tradition in Europe. “When you are singing, you sing about a girl, a man, a flower or an animal,” he said. “But when you do the yoik, you are not ‘singing about’, you ‘are’! See the difference?”

Also drawing large crowds was Noura Mint Seymali, a griot, singer, songwriter, and instrumentalist from Mauritania. Along with her husband, on the guitar, she has become a hit at music festivals around the world.

“With a rich selection of musicians from 25 different countries, the audience was spoilt for choice at Budapest Ritmo,” concluded Euronews’ Gábor Kiss at the end of the three-day festival.