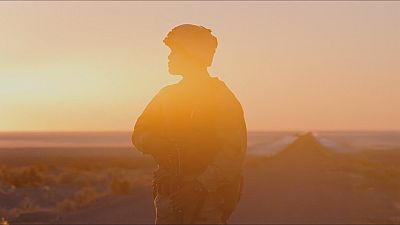 ‘Soy Nero’ is the story of a young Mexican, who dreams of becoming American. After being deported several times, he finally manages to make his way to Los Angeles, where his brother Jesus lives comfortably with his family.

In an ultimate attempt to achieve his dream, Nero decides to enlist in the US Army as a “Green Card soldier” – a shortcut to US citizenship.

Iranian-born filmmaker Rafi Pitts directed the movie. Euronews reporter Wolfgang Spindler caught up with him earlier this year at the Berlin Film Festival, where his film was premiered.

“This idea of wanting to belong or this need of mankind to want to identify is something I have always been interested in. But what I really wanted to tell is a story of immigration, a story of the fight to belong somewhere for any individual,” said Pitts.

The movie is based on the real story of Daniel Torres, a US army veteran deported to Mexico because he applied with a false birth certificate – a fate met by many Green Card soldiers.

“At the end of the day, my concern has always been my fellow man, the average guy on the street, the marginalised guy in the street. I am obsessed with that guy but I am living in a world that really doesn’t care about that guy anymore, or that women anymore, it just does not happen anymore, and populations are fine with that,” Pitts told Euronews. “And that makes me sad because we are now living in times with that rejection, they’re all about rejection, people win votes when they reject, and that’s sad. So, now, that’s something I have to try and fight as a film maker.”

Written together with Razvan Radulescu, who has collaborated with several award-winning directors (including Cristian Mungiu for ’4 Months, 3 Weeks and 2 Days’, which won the Palme d’Or in 2007), the film has garnered critical acclaim on the film festival circuit, starting in Berlin where it was nominated for the Amnesty International Film award.

‘Soy Nero’ is on global release from now.

'24 Weeks' an emotional portrayal of a moral dilemma