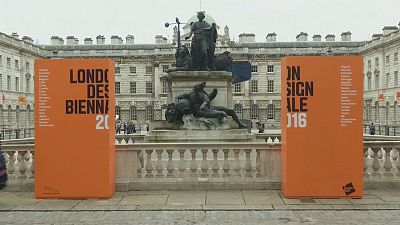 <p>The first ever <a href="https://www.theguardian.com/artanddesign/2016/sep/07/london-design-biennale-review-utopia">London Design Biennale</a> has opened in the British capital. </p> <p>It features a <a href="https://www.creativereview.co.uk/utopian-visions-review-london-design-biennale/">sprawling show of work by 37 countries</a> curated under the theme ‘Utopia by Design’, in reference to Thomas More’s influential work of fiction ‘Utopia’.</p> <p>The Biennale’s director explains why they chose this theme: “Utopia has influenced a lot of design and architectural projects,” says Christopher Turner. </p> <p>“These big modernist housing schemes, for example, were thought of as utopias and utopia has fallen somewhat out of fashion. So we were interested in wondering whether something could be salvaged form the utopian ideal, we didn’t expect big social blueprints, but we thought that spirit of hope might be something that was worth trying to explore in a big international forum like this.” </p> <p>The Austrian entry by Vienna-based design studio <a href="http://www.mischertraxler.com/">mischer’traxler</a> is made up of lights suspended from lightweight rods. When the installation is still, the lights shine brightly, but when the rods are thrown off-balance, the lights dim, reflecting the precariousness of a utopian state, and its potential to unravel when subjected to the reality of everyday life.</p> <p>“The whole structure actually represents utopia as a perfect balanced system, but once somebody goes into the system, it breaks down and the illumination goes down and for us that’s a way of describing how hard it is to achieve utopia,” the studio’s Katharina Mischer explains. </p> <p>At the South Africa stand, visitors are invited to climb inside the jaws of fluffy wild animals. The giant, playful seats toy with conflicting ideas of innocence and corruption, a symbol of the country’s troubled history. The exhibit is the brainchild of <a href="http://www.animal-farm.co.za/">award-winning designer Porky Hefer</a>. </p> <p>“A lot of the utopias that I see around me are all about humans and they’re mostly about how we can adapt technology to create a utopia. No computers were used in this, except for the burning of the logo somewhere around here, it’s all about handcraft, it’s all about keeping the craft and traditions that people have been practicing for so long,” he says.</p> <p>Taiwan’s installation, entitled <a href="http://www.dezeen.com/2016/09/02/preview-top-10-installations-london-design-biennale-2016/">‘Eatopia’</a>, offers visitors a unique culinary experience. The aim is to celebrate Taiwan as a melting pot of cultural identities reflected in its design output.</p> <p>“Food design is a very interesting area to go into. Normally, you can only look at design and you can’t do anything else, but we’re encouraging people to smell, to touch, we also have a narrative that comes with it and eventually you eat it,” says Rain Wu, architect and curator of the Taiwan pavilion.</p> <p>Picking up the London Design Biennale Medal 2016, the <a href="http://fadmagazine.com/2016/09/09/london-design-biennale-medal-2016-awarded-lebanon/">‘Mezzing in Lebanon’ installation</a> offers a snapshot of Beirut street life. Complete with shawarma-sellers, traditional cinema theatres and barbers, it tells the story of a present-day utopia in a volatile country. </p> <p>The <a href="http://www.londondesignbiennale.com/">London Design Biennale</a> runs at Somerset House until September 27.</p>