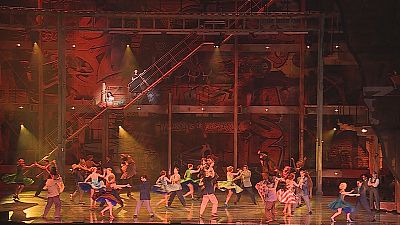 Leonard Bernstein’s masterpiece “West Side Story” is the highlight of the Salzburg Festival in Austria.

Cecilia Bartoli, its artistic director for the Whitsun edition, wanted to bring it to the temple of classical music, and the history of a “Romeo and Juliet” of nowadays couldn’t be more apt during this Shakespearean year.

In the pit the brilliant Simón Bolívar Orchestra, conducted by charismatic Gustavo Dudamel.

“This is a music full of rhythm,” Dudamel told Euronews. “As we say, it’s got lots of Latin flavours, lots of American ingredients in its pace, its melody… it’s a wonderful mix, the perfect recipe for our orchestra to interpret. I’d say that Bernstein’s music really flows in our blood!”

In this production, of which “Musica” has filmed the dress rehearsal, ‘La Bartoli’ plays the first of two Marias, appearing as a phantom-like figure who sings about her former life, whereas a younger Maria acts and dances.

“The role of Maria has always fascinated me,” Cecilia Bartoli told Euronews. “First of all because musically it’s extraordinary! and then… her personality: Maria, as she says in the air, ‘I feel pretty, oh so pretty, I feel pretty and witty and bright’… So she’s witty, naive, certainly, but also passionate, a Latin young woman, in many ways like me, with my Italian character, coming from Rome!”

“Cecilia is a wonderful artist,” said Dudamel, “it’s such an honour for us to work with her, who’s such a hugely generous person.”

The stage director, Philip Wm. McKinley, is one of the best in Broadway.

“This piece brings up prejudice, brings up bigotry, it brings up the entire thing about… presently the refugees… [at the time] we had the Portoricans moving to New York, and the New York residents didn’t want them there; it’s the same themes, and just as powerful today as it was then, 59 years later it’s still relevant,” explained Philip Wm McKinley.

“Dudamel is such an extraordinary artist, so passionate!,” Cecilia Bartoli said. “For him conducting is a necessary act, you can see it in each movement, in each look in his eyes – it’s his life! It’s such a great chance to be able to share this musical experience with him. We have in common a certain Latin temperament, that fire… that passion… and also a lively, merry attitude to life, which is vital, in general!”