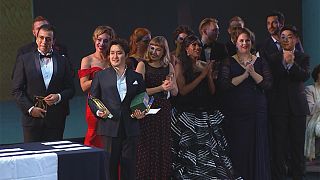 Guadalajara, in Mexico, has been hosting the 24th edition of Operalia and, more than ever, it’s been about excellence.

We chose 12 finalists. Officially there should be ten. But there are so many great voices that we just couldn't let go of at least two more

Deciding among the 40 candidates – already selected out of a thousand – was no easy task for the jury of the prestigious singing competition founded by Plácido Domingo.

“Plácido Domingo himself has told us, the jury, that he’s never seen anything like that in all the years of existence of Operalia, that so many singers are so highly talented,” said Marco Parisotto, Music Director of the Teatro Degollado.

“You know, we chose 12 finalists. Officially there should be 10. But there are so many great voices that we just couldn’t let go of at least two more, you know.”

Elsa Dreisig’s mother is a soprano, as are several members of her family. She commented: “We’re all wondering, well, who’s going to win? And it’s a lot of work, but also a great pleasure.”

Operalia President Domingo said: “They were really, in the first selection, in the semi-finals and today, very strong. Sometimes it’s not like this, sometimes there is a surprise, you know. Somebody comes all of a sudden from nowhere and wins. No, I think they were very constant, very constant you know.”

Operalia has been taking place in Guadalajara for the very first time.

It’s a journey down memory lane for Spanish tenor Domingo, who lived there in his youth.

The 75-year-old has a long history with the Degollado theatre – this year’s venue.

He started singing there when he was 16 and went on to perform there many times, including for the 100th anniversary of the theatre in 1966.

“Fifty years ago exactly, I was singing in this theatre for the centenial anniversary of the theatre. So it’s amazing for me to be here, 50 years later and be still in action, you know! So this is wonderful!” he said.

With the opportunity to perform in front of the most important opera houses directors, Operalia can really boost careers on the international stage.

The winners can make their dreams come true.

Elsa Dreisig added: “Now, what I’m hoping for is to sing on stage. I like competitions, I have to say that I find pushing yourself beyond the limits is agreeable, but nothing compares to singing on stage.”