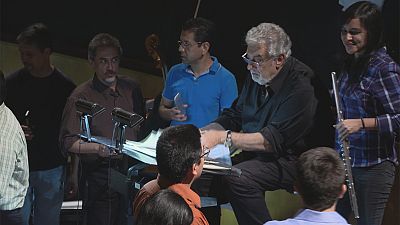 “Perhaps this has been the most difficult one for the jury to select the singers, because the quality was extraordinary,” said Plácido Domingo, Operalia’s President and Founder, summing up the quality of this year’s entries for Operalia in Mexico.

The fact that he (Plácido Domingo) is behind it, I think, is the greatest attraction for the young singers

Marco Parisotto, Music Director at the Teatro Degollado, said that Domingo is the biggest pull for entrants.

“The fact that he’s behind it, I think, is the greatest attraction for the young singers, they want to be part of it. They know that, you know, Plácido Domingo is not only a singer but he’s also a pianist, a conductor,” he said.

“They know that he’ll be there, working with them from the beginning to the end of the competition. So there’s a huge interest from the candidates to be part of this and be close to him and get his energy, and hopefully, win a prize, no?”

French tenor Benjamin Bernheim, a semi-finalist, describes Operalia as the “best audition in the world.”

“There’s an international jury representing the greatest opera houses – Metropolitan of New York, Chicago, Paris, London, Madrid. And, for young singers, regardless of how developped their career is, it’s the best way to be confirmed or to be discovered,” he said.

Polish soprano Marcelina Beucher, also a semi-finalist, added: “I love competitions. Before I was in sports all my life and I love to participate and I did many of them but this was the most stressful one of my life. Especially the jury: it’s like the top one!

“You go on the stage, you see them and you’re like: thank you, that’s enough, I can go home! It’s like singing for stars!”

Countertenor Kangmin Justin Kim, from the US, said it’s a case of being competitors today and colleagues tomorrow.

“We will be hired together at a certain theatre or another and be on stage and sharing, working together, living together,” he said.

“And to have this kind of wonderful experience now, this will absolutely help in the future if we’re making whatever work together. Yeah, it’s great!”