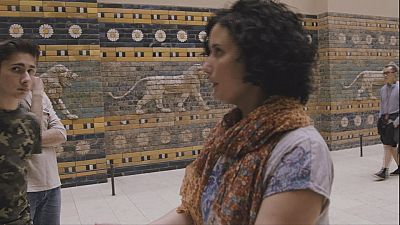 Kefah Ali Deeb is a Syrian refugee living in Berlin who is among one of 19 new Syrian and Iraqi guides working at Museum Island, a UNESCO world heritage site in Berlin’s historic centre. She conducts Arabic language tours at the Pergamon Museum where she tries to remind visitors – some of them also refugees – of the cultural heritage of her native country.

Everybody around the world just speaks about the war. No one tries to remind people what Syria was

“Everybody around the world just speaks about the war. No one tries to remind people what Syria was,” she laments.

A Syrian opposition activist, Kefah Ali Deeb was jailed four times by the regime before she fled. She is proud to be part of the project initiated by Berlin’s top museum to help integrate refugees.

“In the museum where I am working there are many objects from Syria,” she says. “At least these objects here are safe, the war will not destroy them, and people from around the world can come and know more about our heritage and our history.”

Back home in Syria, Kefah used to spend hours drawing the statues in the gardens of the National Museum in Damascus. Her job in Berlin now keeps her in touch with her country’s heritage.

After taking in more than 1.1 million asylum seekers in 2015 alone, Germany is working through the intake phase of the emergency refugee relief operation, towards integrating the new arrivals with Kefah and the other guides are playing a part.