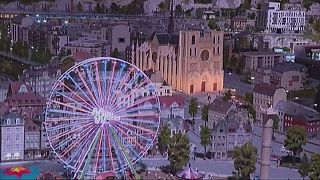 Mini World, France’s first animated miniature park, has opened its doors to the public. Located on the outskirts of Lyon, the park sprawls over 2.5 square kilometres and offers visitors the chance to see an extraordinary miniature world.

“The idea first came to me when I was having dinner with my family four year ago,” said Director Richard Richarté. “I then asked my daughter to build a small model village for Christmas and a miniature Santa Claus. I remember thinking about this all night. I wanted to expand this model and make it come to life.”

If you like attention to details, you will probably fall in love with this miniature park set to capture the imagination of all ages.

Mini World took approximately 70000 hours to complete as dozens of experienced and carefully selected model-makers worked together to make this dream come true.

Private investors spent a total of 3 million euros on this park which is due to expand in the coming years as it will eventually feature replicas of Lyon landmarks.