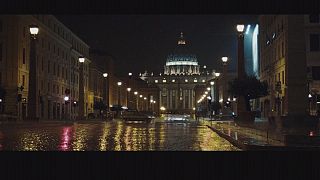 The Italian film noir ‘Suburra’ centres on the murky connections between organised crime and politics in Rome.

(Rome) is a huge metropolis that is governed by different powers that fight, one against the other - in order to maintain, to keep the equilibrium

Based on the novel by Carlo Bonini and Giancarlo De Cataldo, the movie portrays the underbelly of the Italian capital – where sex, votes, even the priesthood can be attained at a price.

Director Stephano Sollina says: “It’s an unconventional, unportrayed part of the city because of course you probably have seen the same images – but in other contexts where Rome is a nice place to be with such a lot of historical beauties – but it (Rome) is not just this.

“It (Rome) is a huge metropolis that is governed by different powers that fight one against the other – in order to maintain, to keep, the equilibrium.”

The story centres around a gangster’s plan to turn Rome’s waterfront into a new Las Vegas.

Pierfrancesco Favino plays a politician drawn into a web of betrayal and deceit.

The movie opened to acclaim in Italy, where it is being developed into a 10-episode series. It will be the first Italian original series on Netflix.