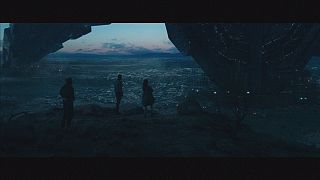 Aliens threaten planet Earth again in “Independence Day: Resurgence,” a sequel to the 1996 blockbuster packed with drama and special effects.

The plot picks up two decades after the original alien invasion: humans have used recovered alien technology to design a new defense programme, but that’s still not enough to protect mankind.

The movie stars Jeff Goldblum and 26-year-old Liam Hemsworth. German director Roland Emmerich said he wanted the plot to include a younger generation living in the aftermath of the first alien attack.

“It’s a different world, it’s a world which is united and this new generation grew up with the fact that if they train hard, they can defend planet Earth against a future alien attack, and that’s just kind of like a very interesting thought for me,” Emmerich said.

Emmerich admits the idea of aliens invading our planet has fascinated him for years.

“When I made the first one, I was always kind of thinking, ‘I wish one day aliens would arrive on Earth’. I would hope they’re not as bad and as evil as the aliens we created, but I still think it would be probably the most amazing moment in all of our lives, you know, when all of a sudden we would make contact.”

“Independence Day: Resurgence” is on global release from June 22 – amid a flurry of sequels faring rather disappointingly at the box office.