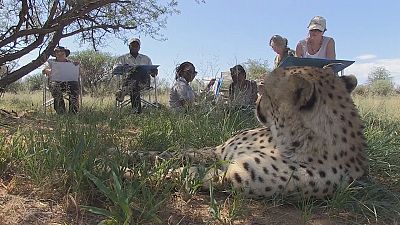 A group of safari artists have the privilege to create a still life of the fastest land animal, the cheetah, at the Na an Kuse Game Reserve, Namibia.
Easel in rucksack the artists have travelled long distances to explore and draw some of southern Africa’s premier game reserves and national parks for art safari.

Safari Art: Touring artists allowed to get up close with their ‘subjects’ https://t.co/2DFmZQnhRepic.twitter.com/mYZ2nZl5qQ

— CCTV Africa (cctvnewsafrica) <a href="https://twitter.com/cctvnewsafrica/status/737693937272557568">31 mai 2016</a></blockquote> <script async src="//platform.twitter.com/widgets.js" charset="utf-8"></script> <b></b> Mary-Anne Bartlett is an art safari tutor: "When you're sketching you're collecting a moment of time. You're sitting in an environment and you become part of that habitat. And the animals will often walk into the scene. And that's a phenomenal feeling – rather than feeling as if you're chasing things." <b></b> For the artists it is a unique and challenging environment. <b></b> Paul Hazeldine is a Safari Artist:"About ten years ago – I'd been doing lots of over-landing, going with all these safaris, and they gave you less and less time to stop. It was almost like a race to get a photograph. And I came across Mary-Anne in one of her shows – she just stood there painting. And it's one of these cases – I'd never painted since school, so it's like 20, 30 years with never painting, and I thought, it's interesting." <b></b> <blockquote class="twitter-tweet"tw-align-center data-lang="fr"><p lang="en" dir="ltr">Spaces still available on my 2016 Zambia Art Safari Workshop <a href="https://t.co/TjIN9njd1h">https://t.co/TjIN9njd1h</a> <a href="https://t.co/8UQgnJ3MCZ">pic.twitter.com/8UQgnJ3MCZ</a></p>&mdash; Nick Mackman (NickMackman) 26 mai 2016

Next to be consigned to paper is the endangered white rhino.
Those on the trip say there is a unique connection between the artist and the animal.
As Safari Artist Fran Williams explains: “I read somewhere, or I was told, that when you sit and paint or draw an animal, you actually have the opportunity to look into its soul. And I think having just sat for probably 20 minutes, half an hour, and drawn a rhino several times, I think this is very true and I’m sure it applies to all animals.”
Art safaris are open to all ages and those with or without a traditional artistic background.
Culture news