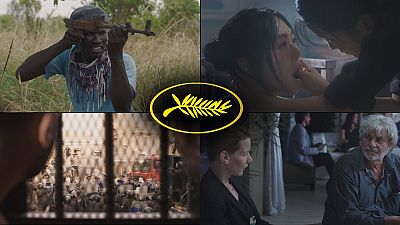 <p>As the glitter settles on the Croisette, let’s take a look at some of the films that left an impression at this year’s Cannes Film Festival. </p> <p>Let’s start with a gripping and perfectly executed huis clos by Mohamed Diab, the politically engaged Egyptian filmmaker who brought us ‘Cairo 678’ in 2010. The opening film of the Un Certain Regard section, <a href="http://www.euronews.com/2016/05/16/mohamed-diab-s-clash-brother-versus-brother-versus-egypt/">‘Clash’</a> takes us on a suffocating journey inside a Cairo police van during the violent summer of 2013, where pro- and anti-Muslim Brotherhood protestors find themselves locked inside together. Impressive performances, camerawork and visuals make for a compelling cinematic experience.</p> <p>Not content with having won the prestigious Goncourt prize, Franco-American author Jonathan Littell ventures into documentary filmmaking. Premiered at a special screening in Cannes, ‘Wrong Elements’ is a contemplative look at life for former child soldiers in Uganda – young adults who, as children, were indoctrinated into a culture of free killing, growing from victims into perpetrators. The film’s strength lies in the way it gives voice to these survivors without interfering, though it could have gained power from tighter editing in places. </p> <p>During a festival that didn’t shy away from excessive violence and even cannibalism, Maren Ade’s ‘Toni Erdmann’ offered a welcome dose of laugh-out-lout comic realism. It tells the story of Winifried, a divorced German schoolteacher with a fondness for wacky humour, who decides to lighten up his serious workaholic daughter’s life with a surprise, and unwelcome, visit. Though long, the film offers some absolutely priceless moments that are as funny as they are moving. Tears of laughter, sadness or both guaranteed. </p> <p>And let’s wrap up this peep at some of our Cannes Film Festival favourites with Korean master Park Chan-Wook’s exquisite “‘Handmaiden’”:<br /> http://www.indiewire.com/article/review-the-handmaiden-park-chan-wook-lesbian-sex-cannes-2016, a historical romance spiced with lesbian eroticism, humour and horror. Adapted from Sarah Waters’ bestselling novel ‘Fingersmith’, transplanting the setting to 1930’s Japan. It tells the story of a young Korean girl plucked from poverty in Japanese-occupied Korea and drawn into a double-cross by a gentleman-swindler. From the director of cult movie ‘Oldboy’, the movie offers an ambitious and highly entertaining triptych, where love conquers all, but not in the ways one might expect.</p> <blockquote class="twitter-tweet" data-lang="en-gb"><p lang="en" dir="ltr">Cannes Film Festival review: The Handmaiden (Mademoiselle)<a href="https://twitter.com/hashtag/TheHandmaiden?src=hash">#TheHandmaiden</a> <a href="https://twitter.com/hashtag/Cannes2016?src=hash">#Cannes2016</a> <a href="https://t.co/QtWgOyDc4k">https://t.co/QtWgOyDc4k</a> <a href="https://t.co/mGXRTV21UQ">pic.twitter.com/mGXRTV21UQ</a></p>— Loose Lips (@Lips_Loose) <a href="https://twitter.com/Lips_Loose/status/733942583588618240">21 May 2016</a></blockquote> <script async src="//platform.twitter.com/widgets.js" charset="utf-8"></script>