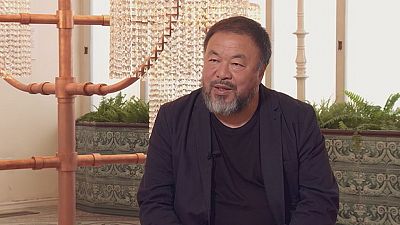 The Museum of Cycladic Art in Athens is running a major exhibition of the Chinese artist and activist Ai Weiwei. Ai Weiwei at Cycladic is the artist’s first show within an archeological museum and in Greece.

The aim is to present his different sides, the artist, the historian, the activist… Ai Weiwei also displays new works inspired by the museum’s permanent collection.

The common ground between old and new works is his obsession with heritage, tradition, individuality and freedom confounded in an increasingly homogenised world, full of borders.

It’s all part of a programme that’s meant to introduce the public to key 21st century artists, according to Sandra Marinopoulos, President of the Museum of Cycladic Art: “This project concerning the dialogue between contemporary art and archaeology began ten years ago. Our aim is to bring young people to the museum. We asked Ai Weiwei to participate six months ago. He was very concerned about the refugee crisis. From that point, we collaborated and he made works especially for us.”

“What we wanted to do really was to give the Greek audience a good insight into Weiwei’s practice, by showing some of his most significant works, he has been doing since 2008, focusing really on wood and marble as materials,” curator Michael Frahm explained to euronews.

Ai Weiwei, who was in the Greek capital for the opening, told euronews: “I am very interested in early activities of human creativity, and I am a collector also of old Chinese artifacts. So when I visited the Cycladic Museum, I realised, there is such a, very skillful, very impressive understanding of sculpture.”

Ai Weiwei’s collaboration with the MCA began in 2015. The artist visited Athens as well as the island of Lesbos. He has since set up a studio on the island to create art that will draw attention to the refugee crisis, and next year he plans to release a documentary about the issue.

“Historically, Europeans are responsible for many, many refugee situations. Currently, you can say that they are very short-sighted. They sacrifice very very essential values which are the foundation of European society: human rights and humanitarian support. It is a very sad situation and I’d say it is a very shameful situation,” said Ai.

Some critics claim the artist is a shameless self-promoter. He says he’s doing what he wants regardless of the media spotlight.

“What I am in, is a refugee situation now. I give out my opinion. It doesn’t have to bring attention. It is my duty, as an artist and as a soldier, or as someone who cooks dinner, prepares dinner for guests. That is what I cook. You don’t have to eat it,” said Ai.

The exhibition includes an enormous collage of more than 12,000 small pictures taken on his camera phone, documenting his time on the island.