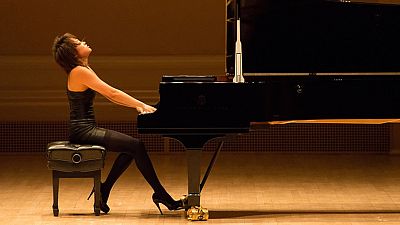 With impeccable technique and tremendous musical sensitivity, few artists generate as much electricity as Yuja Wang. The LA Times wrote of her playing: “Yuja Wang slays Beethoven’s monster piano piece—and makes it look easy.” She returns to Carnegie Hall for a recital you simply cannot miss.

Brahms, like Schumann, had a strong affinity to the characteristically Romantic genre of the short instrumental character piece. The closely related tonalities and motivic kinship of these two early ballades from his Op. 10 suggest that they were intended to be heard as a pair. The grim D-Minor Ballade was inspired by “Edward,” a traditional Scottish ballad about a son who murders his father, while its D-major companion evokes a more wistful mood.

German Romantic writer E. T. A. Hoffmann, who created the memorable character of the half-crazed Kapellmeister Johannes Kreisler, was Robert Schumann’s soulmate and literary counterpart. Kreisleriana pays homage to its namesake in the form of eight fantasy-like pieces that also reflect the contrasting personalities of the composer’s fictional alter egos: the impulsive Florestan and the dreamy Eusebius.

Beethoven’s monumental—and notoriously difficult—“Hammerklavier” Sonata marked a watershed in the composer’s artistic development. With its soaring rhetoric and penetrating introspection, the “Hammerklavier” anticipates the musical language of Beethoven’s so-called late period. The centerpiece of the work is the intensely ruminative Adagio sostenuto, which German critic Paul Bekker famously called “the apotheosis of pain, of that deep sorrow for which there is no remedy, and which finds expression not in passionate outpourings, but in the immeasurable stillness of utter woe.”

This concert is brought to you by medici.tv, the leading online channel for classical music.