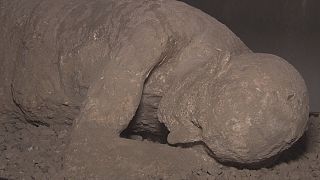 Its new exhibition includes a vivid audio-visual recreation of the moment the ancient city was destroyed in 79 AD, when Mount Vesuvius erupted burying Pompeii and its inhabitants under a thick carpet of volcanic ash.

When a group of explorers rediscovered the site in 1748, they were surprised to find that underneath a thick layer of dust and debris Pompeii was mostly intact. The buildings, artifacts and skeletons left behind provided invaluable information about everyday life in the ancient city.

“We decided to exhibit one of the molds that was already on show here at the Antiquarium before the world war two bombings. It is a mold of one of the victims of the volcanic eruption. Around 100 molds were made after 1863 when the great archaeologist Giuseppe Fiorelli created this technique, where you pour liquid plaster into the hardened ash that formed around the victim’s body after the body decomposed,” says one of the museum’s restorers, Sara Matilde Masseroli.

Featuring a permanent exhibition called ‘Sacra Pompei’ana’, dedicated to the places of worship in pre-Roman Pompeii, the exhibition continues in the Villa Imperiale, a luxurious building dating back to the first century AD never open to the public before.