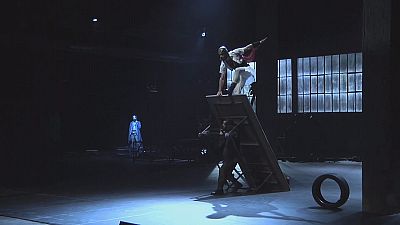 All genres of theatre can be seen, from reinterpretations of classical pieces to work by contemporary playwrights.

The organiser explained to Euronews how classic dramas resonate strongly in today’s world.

Elements of the ancient Greek drama tradition can be seen in contemporary theatre.

Zsofia Rideg says classic texts have a lot to teach us:

“There is a trend in the theatre, more and more contemporary performances use the chorus which is the oldest way of making theatre.”

“This is a great way to represent a mass of people in the theatre at the time of the migrant crisis.”

*The individual becomes more humble as people realise that community and society are more important.”

“Classical dramas reflect this phenomenon better with their ancient texts.”

The Iliad – a tale for our times

A good example is this new interpretation of Homer’s “Iliad” written between 1260 and 1180 BC and set during the Trojan War.

The director of the Athens theatre company believes artists must speak to people’s souls, while politicians are trying to find solutions for society on a practical level.

The Iliad is perfect for speaking to people’s souls during the ongoing migrant crisis in Europe.

Greece is one of the countries most directly affected.

Stathis Livathinos is Director of the Greek National Theatre:

“The production was put together before the migration and refugee crisis erupted this year and last.”

“But it shows Homer had predicted it, because he dealt a lot with war, with destruction, with the negative role people play when they destroy each other.”

A daring critique of convention

“Public” is by the acclaimed Spanish writer Federico Garcia Lorca.

It is perhaps his most enigmatic, surreal, scandalous and revolutionary work, as well as being a pithy embodiment of his artistic creed.

Lorca attacks norms, mediocrity and intellectual narrow-mindedness, as well as art and theatre that have been crippled by convention.

Alex Rigola is Director of the Teatro Abadia in Madrid.

“The love, which Lorca speaks about in this drama, is an impossible love but also a strange love, far removed from the everyday.”

“We may not consider this as dangerous nowadays, but remember some countries of the world still have the death penalty and equality can be a false equality, because there are still many countries where two homosexuals cannot marry.”

As well as international productions, this event is the place to go to get a flavour of the artistic depth of theatre in Hungary.

There are also exotic shows from further afield, like a theatre group from South Korea that performs
shamanistic ritual and death songs.

In this, their third year, the Madách International Theatre Meeting puts on several shows a day in the Hungarian National Theater in Budapest