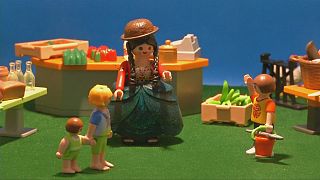 The popular German toy range of Playmobil characters is being exhibited in Bolivia of all places, at the Costumbrista Museum Juan de Vargas in the capital, La Paz, showcasing more than 1000 vintage models brought together by six members of the Playmobil Collectors’ Club.

Star of the show is a Cholita doll made with original 1974 parts by Enrique Montoya.

“I created this cholita last year when I was creating the Facebook page (for the Collectors Club) we needed an icon to represent us. Then last year we did a sketch of the toy and this year I materialized the idea, what I adapted. This cholita. It’s a side of us. Let’s not forget Bolivia is multicultural with several aspects. She is a small side of us, most of all, La Paz residents, because she wears red and green, our la Paz cholita”

“To create her has not been difficult. I already had a design. It simply took accommodating the pieces, the ideas. I shared my thoughts with some friends and they gave me ideas on how to do it because I’m not very skilled with my hands. Then they gave me some ideas and as I knew playmobil have certain characteristics, I simply took each toy with the characteristics I needed, taking their parts and I obtained the cholita. I painted her with oil painting and used a hot knife for some parts for them to fit. That’s how the cholita was born,” says Montoya.

Montoya intends to send the toy to German producer Geobra Brandstatter in Zirndorf, but he decided to first use her as an inspiration for other collectors to create more dolls before sending her.

The show runs until the end of April.