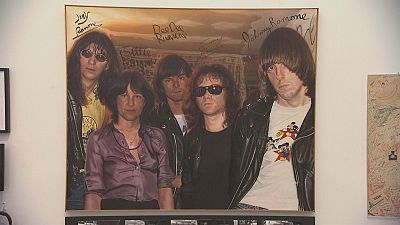 The Ramones have their place in rock ‘n roll history, and the New York legends are now being honoured with an exhibition at the Queens Museum to celebrate the 40th anniversary of their debut album that shook the world.

In partnership with the Grammy museum the show features more than 400 items, although at the time the punk rockers could hardly have suspected they would ever be museum exhibits. They might well have hated the idea…

“We were very fortunate. We’ve been able to borrow from almost all the people connected to the exhibition, from Linda, Johnny’s widow from Mickey Leigh, Joey’s brother, from Vera (Boldis), Dee Dee’s first wife, and from Claudia Tienan, who is the longtime companion I’m not sure if they were married, of Tommy’s. So, we got the real stuff out of the real archives,” says Guest Curator Marc H. Miller.

Former tour manager Monte A. Melnick survived the mayhem to tell the tale of how the group wielded massive influence over those that followed.

“When they were around they would go out and play all over the country and all over the world and kids would see them and say, ‘Hey, look. This is simple stuff but it’s good music.’ You don’t have to be like a virtuoso on the guitar or whatever or the bass. And they inspired a lot of bands to start groups and I’m amazed at all these humongous groups now idealized the Ramones. I mean there’s Eddie Vedder from Pearl Jam, Bono from U2…”

The show runs in New York until the end of July…

…and then moves to the Grammy museum in LA in September.

What more is there to say about Joey, Johnny, Dee Dee and Tommy, all now sadly dead? Nothing, but an extra line of text means we can squeeze in another song – Gabba Gabba Hey!