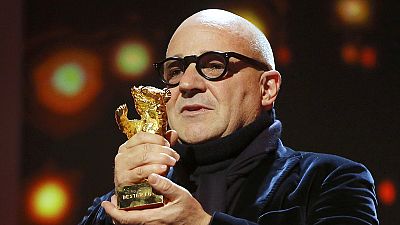 As the great and the good of the film industry posed, pouted and paraded on the red carpet in Berlin the refugee crisis cast a grim shadow over proceedings.

Still cinema has the capacity to illuminate and this year’s top award, the Golden Bear for Best Film, went to
‘Fuocoammare’ (Fire at Sea) by Gianfranco Rossi, the piece spotlights the plight of refuges on Lampedusa.

The film maker sees the documentary as a factual record, not a morality tale, as he explained: “I struggle against that, I don’t want to give any message in my film, but I want to give a testimony of something. It’s very rare that a documentary wins an achievement at a film festival, a prize like this.”

In his latest film the Oscar winner examines the crisis facing the European dream.

#berlinale Death in Sarajevo: An interview with Denis Tanovic https://t.co/aly5OSIhuxpic.twitter.com/e6PxpmuSpd

The director spoke about his motivation: ‘‘It’s a monodrama
of one hour and a half and its kind of hard to make a movie out of it,even when you have tremendous actors like Jacques Weber who played it on the stage and it was wonderful, but it is theatre. So I did not know how to to crack it, it took me a long time crack it, to find a way to that I could envelop the story.’‘

The Silver Bear for Best Director went to Mia Hansen-Løve for ‘L’avenir.’

In the movie Isabelle Huppert plays a philosophy teacher, married with two children. Her life falls apart after her husband announces he is leaving her for another woman.

Danish actress Trine Dyholm picked up the Best Actress gong for her role in Thomas Vinterberg’s new film ‘The Commune.’

Danish director Thomas Vinterberg is back in the #Berlinale2016 with THECOMMUNE. Review: https://t.co/ZprUKIBg4tpic.twitter.com/zoMKlrM9gh

The film, based in the early 70’s, sees a couple create a commune in their home with unexpected results.

The actress believes the film is ultimately about the importance of sharing:

Trine Dyrholm wins Silver Bear for Best Actress at the #Berlinale for Vinterberg's The Commune pic.twitter.com/Gtzrrl6vCW

“My character uproots, but the basic concept of sharing still shines through. That is the message that Thomas wanted to get across, maybe not husbands and wives, that can be difficult, but we have to take care of each other, we have to share things.’‘

The film follows a love triangle in the wake of the 2011 Arab Spring in Tunisia.

“The most important thing was to get my whole body into it. Because I move around a lot and you see everything. I consumed a lot of energy because Hedi is minimalist on all levels and energetic, so it was difficult for me at the beginning.’‘

The Audience Award went to ‘Junction 48.’
The film, a project by Israeli/American filmmaker Udi Aloni, uses Hip hop to bring together Israeli and Palestinian musicians.

‘Who’s Gonna Love Me Now?’ is a film about Saar, a gay man from a religious family in Israel. Saar flees to London where he enjoys a gay lifestyle. He lives the dream, but wakes up to a nightmare when he discovers that he has contracted HIV.