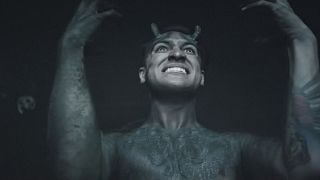 Brendon Urie is the last remaining member of US pop-rock group Panic! at the Disco, but he’s the first to achieve the number one spot on the Billboard album charts.

I like to be flamboyant, play characters, wear make-up, play dress up. I was doing that since I was a kid.

Released in January, Death of a Bachelor, the band’s fifth album, topped the Billboard 200 and sold nearly 200,000 albums in its first week.

Written at his home and inspired by his wife, Urie describes his latest musical endeavour as “a mix between Sinatra and Queen”.

The 28-year-old co-wrote the album’s songs and played most of the instruments on the project, minus the horns.

A modern-day showman, inspired perhaps from his Las Vegas upbringing, Urie admits he enjoys acting out in videos and on stage.

“I like to be flamboyant, play characters, wear make-up, play dress up. I was doing that since I was a kid – I’ve always had a dress-up box. It just felt very natural but there’s something about it that adds to the element of what I want to cultivate with this band. It’s something that I’m just so extremely proud of, the visual aspect – not only the sonic aspect band but visually with music videos and with the live show, it’s something that I spend a lot of time thinking about because it’s so important.”

Panic! at the Disco will soon tour alongside Weezer in the US and will hit various European music festivals this summer.

Critique of the album is mostly positive, with Alternative Press magazine calling it a “remarkably nuanced affair”.