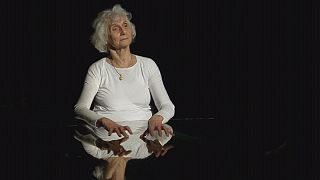 Ninety-year-old Hungarian Auschwitz survivor Eva Fahidi has captivated audiences in Hungary and Berlin with a dance which expresses her life story and the horrifying experiences of concentration camps.

“Sea Lavender or The Euphoria of Being”, had its German premiere in Berlin after playing to full houses eight times in Budapest’s prestigious Vigsinhay Theatre since its October launch.

When she was 18 years of age Eva and her family were deported from Hungary. Her sister mother and father perished in Auschwitz-Birkenau.

The dance is an important way for her to express her feelings and memories.

“My grandson came to the performance and he was beside himself, he was so moved. What I am saying that there is a large group of society who we don’t reach by talking about our experiences. With this dance, gestures with which you can express everything, I did reach them,” she said.

“A dance that emerges from horror, and turns into an immense affirmation of life and empathy. A positive glimmer of hope in these times when many people are losing courage and are unsettled by political challenges like the refugee crisis.”

After decades of silence in her Hungarian home, Fahidi put her life memories down on paper. She joined the Budapest dance company ‘The Symptoms’ and they made it possible to tell her story. It touched the audience in Berlin.

“My expectations were far surpassed. I did not expect such an emotional…let’s call it fireworks. I am very surprised how you can tell so much with so little. Very, very positively surprised.”

“It was a wonderful evening. Eva has such strength in herself, it is indescribable. Such a positive attitude with such memories, such grief. It is amazing,” were the responses of two women.

“Sea Lavender or The Euphoria of Being” with Eva Fahidi will play in other cities in Germany during its world tour.