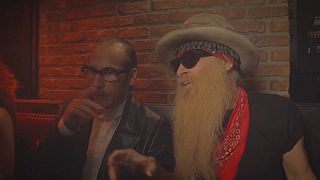 Billy Gibbons is on his own. After four decades on guitar with the American rock band “ZZ Top” the 65-year-old is going solo.

His new album, “Perfectamundo” takes on a bit of an Afro-Cuban flavour that may come as a surprise to many of his fans.

But in fact the influence is from his early days. Gibbons studied Latin percussion in Manhattan with virtuoso, “Mambo King” Tito Puente who was a friend of Billy’s band leader dad. Puente taught a young Billy essential Latin rhythms via conga, bongo and maracas.

“Basically gathering a bunch of very talented guys and gals in the studio to make a lot of loud noise. We are surfing the web in the meantime, smoking cigarettes, drinking wine – basically a private club with no time clock running and no real thought of ‘let’s make a record’. We were just making experiments in music that just happen to have an Afro Cuban twist,” the singer explained.

Billy – his gravel voice and band The BFG’s hit the road in Florida this weekend before he finally gets the chance to play in Cuba with tour stops at the Havana Jazz Festival on December 17,18 and 20th.

New music and a new song. David Bowie premiered his latest single, “Blackstar” a snippet of which was heard recently on the opening credits of a new TV thriller, “The Last Panthers”.

Now the Thin White Duke has released the track in full all 10 minutes of it, complete with an accompanying video helmed by “Panthers director Johan Renck.

“Blackstar” which is taken from Bowie’s forthcoming album of the same name is out now with the album set to follow on January 8.