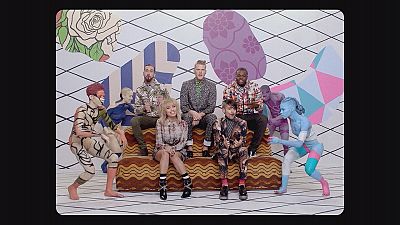 Since winning the NBC show ‘The Sing Off’ in 2011 the five-piece harmony group Pentatonix have been riding high in the charts with a self-titled number 1 album.

The single from the collection is ‘Can’t Sleep Love.’

Tonight was a dream... THANK YOU. #TheForceAwakens#PTXonAMAspic.twitter.com/Pum1zuZBaW

The group believe everyone can relate to the song: Mitch Grassi: “I feel like it’s a really relatable song, it’s about someone that you’re so totally obsessed with that you can’t, you’re losing sleep over them.”

Scott Hoying: “Which we’ve all felt.”

Mitch Grassi: “Which we’ve all felt.”

Scott Hoying said the group wrote many songs for the album, not all memorable:“We probably wrote like 50 songs for the album and then we went through and we had a playlist and we just sat down and listened to every single song all the way through and we were like, ‘That’s amazing but it sounds a little too much like this other one.’ ‘That’s amazing but it’d be better for the next album’ – we just talked everything through and narrowed it down. And it’s funny because when we first narrowed it down, we narrowed it down to like 29 songs – we were like, ‘This is going to be the longest album ever.’ So getting it to the final 13 or whatever was definitely a task.”

Then there is the video, Scott again:“A lot of the times when we arrange we kind of have the video going in our head of what we’re thinking, just so it becomes a cohesive unit in the end and so we’ll go to the directors and we’ll be like, ‘We know we want something really colorful with dancers and camouflage, and we’ll give those basic type of ideas and then directors will kind of help us put together a treatment and it was so much fun, that was probably one of our favorite shoots we’ve ever done.”

The countdown is on. 6 more days until we perform the @starwars score on @TheAMAs! #PTXonAMAspic.twitter.com/2UU26Ljitl

Pentatonix’s single ‘Can’t Sleep Love’ is out now and the group are on tour.