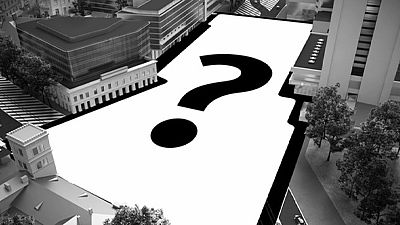 Tallinn, the capital of Estonia, is home to nearly half a million people.

While the small Baltic country is widely recognised as one of the most advanced e-societies in the world, its outdated, car-oriented inner city road infrastructure definitely needs some rethinking.

Euronews correspondent Anja Bencze visited the city’s famous Viru junction: “Here at the heart of Tallinn’s busiest junction, the challenges facing modern urban planning are obvious. Too much noise, too much concrete and too many cars. What could the urban epicenter of the future look like? That is one of the questions being asked at the Tallinn Architecture Biennale along the theme “self-driven cities”.”

The Viru intersection in central Tallinn, which has been remodeled, destroyed and rebuilt several times over the past century, was the object of this year’s Vision Competition, open to architects, urbanists and students.

The challenge? To imagine how driverless cars could alter the cityscape and the public space.

“The winners are from Denmark and France (‘Enhanced Urban Movement’ by Clement Lobbens and Frederique Barchelard),” said the competition’s co-curator Ott Alver. “They are solving all of the problems we have concerning buildings around this area, dealing with cars, dealing with people on the square itself. They are actually bringing something new to Tallinn.”

Finding a new concept for the Viru Square is part of a wider process in Tallinn toward a more people-friendly urban space. The city hopes to be selected as the European Green Capital in 2018.

Architect and urban planner Marten Kaevats is the main curator of this third edition of the Tallinn Architecture Biennale. He strongly believes in a sustainable future.

“Self-driving cars means something like 10 times less cars in cities, which is quite radical, no congestion,” he told euronews. “When self-driving mobility comes, this means if there are 10 times less cars and cars use the same space a lot more efficiently than cars do now, what do we do with the (remaining) space? Because there will be too much of it. And now architects and landscape architects need to start being creative and have a new tool set.”

Entitled ‘Body Building’, the biennale’s main exhibition presents an impressive line-up of internationally renowned architects and researchers, experimenting on the borderline of architecture.

Using new materials and cutting edge technology like robotic fabrication and multi material 3D printing, they offer a peak into the future of space, design and everyday objects.

“Body and building is actually set as two extremes that are opposed, ‘building’ being something regular and something that we know as a building. It has straight walls and is made out of concrete and glass whereas ‘body’ is something organic, self-regulating, adaptive. It’s a system,” said co-curator Siim Tuksam.

“And we actually tried to do that in a space as well. So we would have the objects situated in a space from one extreme to the other,” added co-curator Sille Pihlak.

The algorithms developed for the project are based on the behavior of swarms and social insects such as ants.

“A lot of our work is really invested in algorithmic design,” explained Kokkugia co-founder Roland Snooks. “So this is an idea that instead of directly drawing or modeling a building or a piece of architecture, we are interested in what are the underlying conditions from which something can emerge. For example: A lot of the algorithms we use come from swarming and flocking, so the way flocks of birds, schools of fish, operate. Through the interaction of all these simple decisions some complex behaviour emerges. We are interested in a way of thinking about architecture like this.”