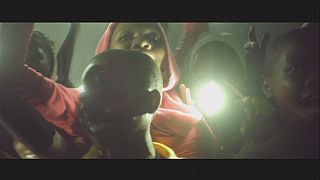 It is the International Year of Light, the latest annual UN push to highlight primary outstanding global problems.

“Until The Sun Comes Up” is singer-songwriter Ragav’s offering to SolarAid, an NGO that brings solar light to remote villages that lack electricity and which use hazardous kerosene lamps for lighting instead.

“1.3 billion people have no electricity so when I say that number, people often think I mean to say million. It’s a sixth of the planet with zero electricity and until you go there and not just go there, experience the, or hear the stories and the negative experiences with the kerosene industry, you can’t totally understand the impact,” says Ragav, admitting the scale of the problem.

Raghav personally bought and delivered more than 300 solar lights to school children in a small rural township of in Tanzania and caught the entire thing on camera.

“When we first handed out the lights it was hard to explain what they were to many kids who’ve never experienced real electricity at night or solar energy. Their idea of power in their homes or in their school would be kerosene. And when the sun went down, that’s the climax of the video, they started partying without… It wasn’t choreographed and it wasn’t shot to be a music video. They were just having such a great time,” remembers Ragav.

The solar lights will eventually help students at Shungubweni Secondary School to study an extra 375,000 hours, saving their families tens of thousands of dollars in kerosene and candle costs and eliminating a potentially severe health and safety risk in their daily lives.